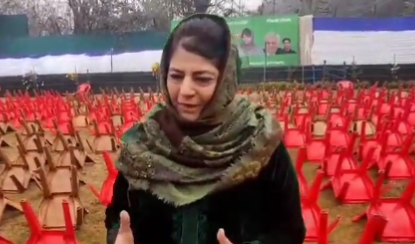 SRINAGAR, Dec 12: Authorities on Sunday did not allow the Peoples Democratic Party (PDP) to hold a youth convention here citing COVID-19 restrictions.
The convention of the youth wing of the party was scheduled to take place at PDP president Mehbooba Mufti’s ‘Fairview’ residence on Gupkar Road here.
However, all roads leading to the venue were sealed by the police and no movement was allowed on the road. Journalists were also barred from moving towards the venue.
A PDP spokesperson claimed that Mufti was placed under house arrest.
In an order, the Executive Magistrate, First Class, South Srinagar said in view of the report received from the Senior Superintendent of Police and in view of COVID-19 restrictions in place, “It is hereby ordered that the scheduled youth conference that is to be held by PDP at Gupkar is hereby not allowed.”
The magistrate directed the station house officer concerned to “ensure” that no such event takes place “without the permission of the competent authority.”
PDP spokesperson Najam-us-Saqib said the party activists were barred from moving towards Mufti’s residence.
After the convention at Mufti’s residence was foiled, the party tried to hold it at its headquarters near Sher-e-Kashmir Park here “but the office was also sealed by the administration,” the spokesperson said.
He claimed that Mufti was placed under house arrest. However, there was no official confirmation. (Agencies)