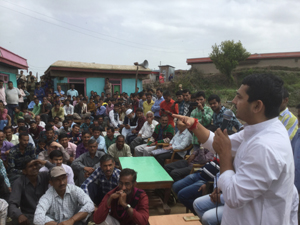 UDHAMPUR, May 16: MLA Ramnagar, Ranbir Singh Pathania, today concluded a three-day tour of far flung and neglected areas of his constituency during which he inspected public works as well as projects and took first-hand overview of the public issues related to drinking water, electricity, road connectivity, healthcare, education facilities.
Pathania directed line officers as well as different departments to ensure maximum presence in far flung and neglected areas of Ramnagar. He further exhorted on the people to maintain better liaison with official machinery and try to get maximum benefits out of public welfare schemes and programmes.
He also called upon the officers to keep stationed at their headquarters in the area and keep updated about their movements, if any. He also asked them to display, in advance, their movements in various far-flung areas so that people could take maximum benefit out of public utility schemes and programmes.
He inaugurated newly constructed school building of Middle School Basantgarh constructed at an estimated cost of Rs 12 lakh, tiled pathway from HSS Basantgarh to Masjid Mohalla constructed at an estimated cost of Rs 42 lakh and a road from Pachound to Chappar proposed to be built at an estimated cost of Rs 930.49 lakh.
While addressing largely attended Janta Darbars at Basantgarh, Chatriari, Gandh Top, Majori, Dudu Kirchi, Shiv Gali, Kot Baggan, Chatrara, Sia, Meri, Sarail, Parla Chakal, Pattian Paddar, Pachpund, Gulli Galla, he called for connecting of Basantgarh-Khaned road to Macchedi/Lohai-Malhar in Kathua district and expediting work on Dudu to Kailash road thereby create an effective road-links for the people of three districts separated from each other by geographical barriers.
Pathania made a fervent appeal to the Chief Minister to initiate recruitment drives in Basantgarh, Khaned, Ponara, Pachound, Balota, Garh Samna Banj, Jophar and other far-flung areas of Ramnagar and Majalta tehsil.