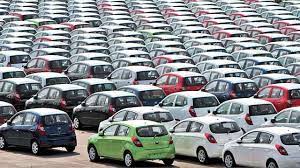 NEW DELHI, Jul 14:
Passenger vehicle wholesales in India rose to 2,31,633 units in June as compared with 1,05,617 units in the same month of 2020 which saw massive COVID-19 related disruptions.
As per Society of Indian Automobile Manufacturers (SIAM), two- wheeler dispatches from the companies to dealers stood at 10,55,777 units last month as against 10,14,827 units in June 2020.
Total three-wheeler sales however declined to 9,397 units last month as against 10,300 units in the same period last year.
Total sales across categories rose to 12,96,807 units last month as compared with 11,30,744 units in June 2020, SIAM noted.
In the first quarter of this fiscal year, total passenger vehicle dispatches rose to 6,46,272 units as compared with 1,53,734 units in April-June 2020-21.
Similarly, total two-wheeler wholesales stood at 24,03,591 units in the first quarter as against 12,94,509 units in the same period of last financial year.
Total commercial vehicle sales during April-June this fiscal year stood at 1,05,800 units as against 31,636 units in the same period of 2020-21.
Similarly, three-wheeler sales rose to 24,376 units this fiscal year as compared with 12,760 units in the first quarter of 2020-21.
Sales across the categories rose to 31,80,039 units in the first quarter as against 14,92,612 units.
Commenting on the sales data, SIAM President Kenichi Ayukawa said many original equipment manufacturers (OEMs) had to shut down their manufacturing plants during the period under review to make oxygen available for medical purposes.
The automakers also contributed towards augmenting oxygen supply to hospitals, supporting healthcare facilities and helping local communities, he added.
“Due to various lockdowns, many dealers could not operate, leading to subdued sales. Lately, with ease in restrictions, OEMs have carefully resumed operations in a phased manner,” Ayukawa noted.
The Indian automobile industry is facing headwinds like steep increase in commodity prices, semiconductor shortage, and fear of a third COVID wave, he said.
“In such an uncertain environment, the industry is working hard to maximise production and sales while ensuring safety of our people and customers,” he added.
SIAM Director General Rajesh Menon noted that domestic sales had dropped during the first quarter of the last fiscal year due to the nationwide lockdown induced by the first wave of the pandemic.
“This year too, in the first quarter sales were subdued due to the impact of COVID second wave,” he added.
Menon said passenger vehicle segment registered sales of 6.46 lakh vehicles in the first quarter which is the lowest in the past seven years, barring April-June 2020-21.
Similarly, sales of commercial vehicles, two-wheelers were lowest in the last few years, he said.
“Three-wheeler segment was the worst-hit with sales of just about 24,000 units, which has been lowest in more than two decades, barring Q1 of FY 2020-21,” he added. (PTI)