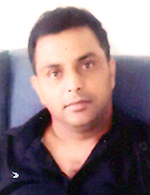 Excelsior Sports Correspondent
JAMMU, Jan 5: Parvez Rasool led 15-member Jammu and Kashmir team left for Delhi to participate in the prestigious Mushtaq Ali T20 Cricket Tournament beginning fr-om January 5, 2018.
Jammu and Kashmir will be taking on Services in the first match of this North Zone leg of the tournament.
According to the reliable sources, former Ranji Trophy skipper and Duleep & Deodhar Trophy Player, ace all-rounder of the State, Vijay Sharma has been appointed as the Head Coach of the team. The employee of the Motor Vehicle Department of the State, has the distinction of being one of the top class all-rounders Jammu and Kashmir has ever produced. He was not only a scalp hunter but also hungry for runs and for success as well. He has the honour of helping Jammu and Kashmir win matches at his own with his all-round ability. In his prime days, he was among very few bowlers of the State, who had the art of wobbling the ball both the ways.
Apart from Vijay, former Ranji Trophy Player, Imraj Thakur has been appointed manager of the team, while Dr Ajaz Chillu, Pawan Sharma and Mushtaq Ahmed Rather have been named Physio, Trainer and Fielding Coach respectively.
The Team: Parvez Rasool (Captain), Ian Dev Singh Chauhan, Mohammad Mudhasir, Shubham Khajuria, Ahmed Banday, Bandeep Singh, Pranav Gupta, Manzoor Dar (Pandov), Umar Nazir, Ram Dayal, Manik Gupta, Shubham Singh Pundir, Jatin Wadhawan, Owais Shah and Waseem Raza.