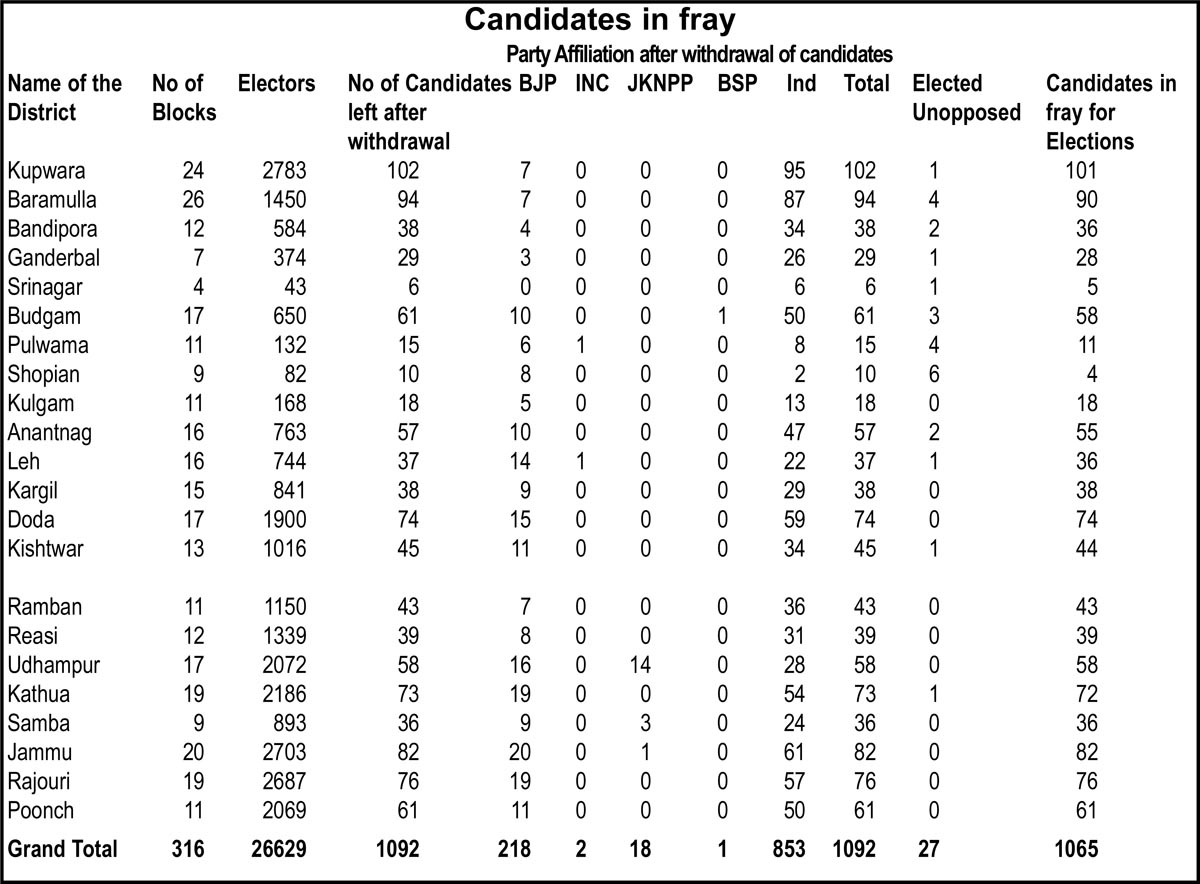 JAMMU, Oct 12: Though National Conference, Congress and People’s Democratic Party (PDP) have stayed away from the elections to Chairpersons of the Block Development Councils (BDCs), the second tier of Panchayati Raj System, presence of 853 Independent candidates in the fray was clear indication that proxies of three parties have jumped into the race as Independent nominees.
As many as 27 Chairpersons of the BDCs have been elected unopposed after last date of withdrawal of the nomination papers today, Chief Electoral Officer (CEO), Shailendra Kumar, who happens to be the Election Authority for the BDC elections, told the Excelsior.
With 27 candidates winning uncontested from out of 310 BDCs, the elections will now be held for 283 Chairpersons on October 24. Jammu and Kashmir has total 316 BDCs. There were no women Panchayat members in four BDCs reserved for them while in two BDCs, there were no Panchayat members. In view of this, election for these six BDCs was deferred.
Notwithstanding the Congress call to boycott the BDC elections, two candidates of the party have defied the boycott call and joined the electoral fray-one each in South Kashmir’s Pulwama district and Ladakh division’s Leh district.
Though the top BJP leaders of the State had announced that the party would contest election for 280 BDCs, it has only 218 candidates in the fray, 62 short of the claim. The BJP leaders had said that they will field candidates for chairpersonship of 280 BDCs and support friendly candidates in 30 others.
“The BJP seems to have fallen short of candidates in the Kashmir valley as it had no contestant in four BDCs of Srinagar district and just seven each for 24 and 26 BDCs respectively of Kupwara and Baramulla districts,” the official figures revealed.
Apart from 218 candidates of BJP and two of Congress, only two other political parties, which have fielded their nominees for the BDC elections were Jammu Kashmir National Panthers Party (JKNPP) with 18 candidates-14 in Udhampur, three in Samba and one in Jammu and Bahujan Samaj Party (BSP), which has fielded just one candidate in Budgam district.
However, quite significant was the presence of 853 Independent candidates in the fray, the highest being 102 in Kupwara district followed by 94 in Baramulla, 82 in Jammu, 76 in Rajouri and 61 in Poonch.
Political observers believed that majority of Independent candidates in fray were proxies of National Conference, Congress and PDP, which have decided to stay away from the elections citing Kashmir situation, restrictions, detention of political leaders and other factors. Some leaders of smaller political parties might have also joined the pray.
Though the leaders of the boycotting political parties denied that their candidates have joined the electoral battle for the BDC elections, the observers were of the view that presence of such a large number of Independent candidates in the fray especially in the Kashmir valley where National Conference and People’s Democratic Party have large presence, was clear indication that their leaders, who were elected as Sarpanchs and Panchs in last year’s Panchayat elections, have taken plunge in the BDC elections.
“The presence of 102 Independent candidates in Kupwara, 94 in Baramulla, 61 in Budgam, 57 in Anantnag, 38 in Bandipora and 29 in Ganderbal districts of Kashmir dropped enough hints that proxies of major political parties have joined the fray in the BDC elections,” the observers opined.
Meanwhile, out of total 1382 candidates, who had filed nominations for the elections, now 1065 were left in the fray following withdrawals and unopposed election of 27 Chairpersons.
Highest number of six Chairpersons have been elected uncontested in South Kashmir’s Shopian district followed by four each in Baramulla and Pulwama, three in Budgam and two each in Bandipora and Anantnag.
The districts, where no unopposed candidates have been elected, included Kulgam, Kargil, Doda, Ramban, Reasi, Udhampur, Samba, Jammu, Rajouri and Poonch districts.