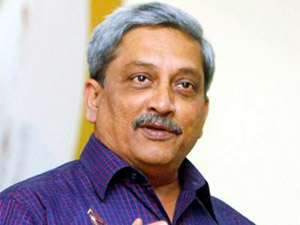 PANAJI, Mar 17: Goa Chief Minister Manohar Parrikar, a former Defence Minister who had been battling a pancreatic ailment for over a year, died at his private residence near here today. He was 63.
The health of Parrikar, a technocrat-turned-politician and a BJP stalwart, took a turn for the worse in the past two days after his medical condition fluctuated for over a year. The four-term Chief Minister was flown to the US for treatment in March last year.
“The Chief Minister died around 6.40 pm today,” a senior State Government official said.
Sources said Parrikar was put on life support system late Saturday night. A widower, Parrikar is survived by his two sons and their families.
The Central Government announced national mourning on Monday.
Prime Minister Narendra Modi condoled the death of Parrikar, hailing him as an “unparalleled leader”.
“Shri Manohar Parrikar was an unparalleled leader. A true patriot and exceptional administrator, he was admired by all. His impeccable service to the nation will be remembered by generations. Deeply saddened by his demise. Condolences to his family and supporters. Om Shanti,” Modi said in one of several tweets.
“Manohar Parrikar was the builder of modern Goa. Thanks to his affable personality and accessible nature, he remained the preferred leader of the state for years. His pro-people policies ensured Goa scales remarkable heights of progress.
“India will be eternally grateful to Manohar Parrikar for his tenure as our Defence Minister. When he was DM, India witnessed a series of decisions that enhanced India’s security capacities, boosted indigenous defence production and bettered the lives of ex-servicemen,” Modi said.
Parrikar was a leader who enjoyed acceptance from all sections of the BJP and beyond. He played a key role in making the BJP a force to reckon with in Goa, which remained for long a Congress bastion, with regional outfits having pockets of influence.
Despite his falling health, Parrikar had presented two state budgets in 2018 and 2019 and had attended public functions, including the inauguration of an iconic bridge across River Mandovi.
A known fighter, an ailing Parrikar’s decision to go for a ride and inspect two upcoming bridges in the state with a feeder tube protruding from one nostril was defining image has sought to suggest he is still in-charge of the State.
Our Jammu correspondent adds: Governor Satya Pal Malik has expressed grief over the untimely demise of Manohar Parrikar, Chief Minister of Goa.
Paying tribute to Parrikar, the Governor described him as a widely respected public figure and an able administrator whose service to the country will always be remembered.
The Governor has prayed for peace to the departed soul and strength to the bereaved family members.
Leader of Opposition in Rajya Sabha Ghulam Nabi Azad expressed his heartfelt grief on the sad and untimely demise of Manohar Parrikar.
“I am deeply saddened by the sudden and untimely death of Manohar Parrikar. In his death, we have lost an able Parliamentarian and a distinguished colleague.” said Azad.
He also expressed his deepest sympathies to his wife, children and other members of the family. Azad prayed that the departed soul and may rest in peace.