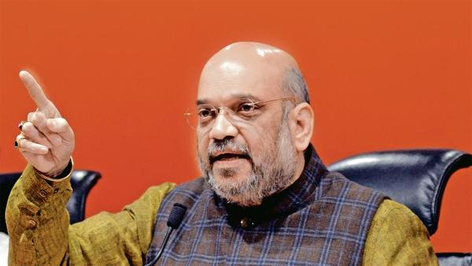 NEW DELHI, Nov 8:
A high-powered committee has been formed by the Centre to implement Union Home Minister Amit Shah’s directive that around seven lakh CAPF jawans should get to spend at least 100 days with their families in a year, officials said on Friday.
The seven-member panel, headed by CRPF Additional Director General (ADG) Atul Karwal, was notified on Thursday and asked to submit its recommendations to the ministry within four weeks.
The committee has one officer each from all the Central Armed Police Forces (CAPFs).
Last month, Shah had directed the CAPFs to undertake a mega manpower planning and ensure that around seven lakh jawans get to spend at least 100 days with their families in a year.
The home minister was given a presentation in September about the functioning of the CAPFs in the ministry, following which he directed that the deployment details of the troops of these forces should be “digitised” so that better manpower rationalisation can be done.
The committee has been given a two-point terms of reference that has been accessed by PTI:
In order to ensure that each jawan can stay with his family for at least 100 days in a year, a software may be designed for digitisation of deployment and (ii) propose changes, if any, in service conditions/standard operating procedures of the force in order to give effect to the above (point no 1) objective.
“The committee will look into the entire gamut of deployment of individual troops and also in composite units like battalions and companies,” a senior official said. The CAPFs include the Central Reserve Police Force, Border Security Force, Central Industrial Security Force, Indo-Tibetan Border Police, Sashastra Seema Bal and Assam Rifles.
Once the plan is implemented, the jawans are expected to be posted at units close to their home town or where the family lives so that they can travel and stay with their families when there are no operational exigencies, a senior official had said.
In order to achieve this, the force chiefs have been asked to assess and prepare reports of their additional manpower so that the over-all deployment of a CAPF unit is not affected.
When this data is digitised, as compared to the regular paper file format prevalent as of now, it will be easy for the force headquarters to rotate and deploy their troops, the official had said.
This system will also help in ensuring that a big grievance of personnel regarding their transfer and posting to a place near to their parents or family home will be addressed up to certain extent, he had said.
Last year, former BSF chief K K Sharma had told PTI that an average jawan of his force only gets to spend about 2.5 months (about 75 days) in a year with his family and if one has a service of about 30 years then this figure comes to about five years in the entire job period. (PTI)