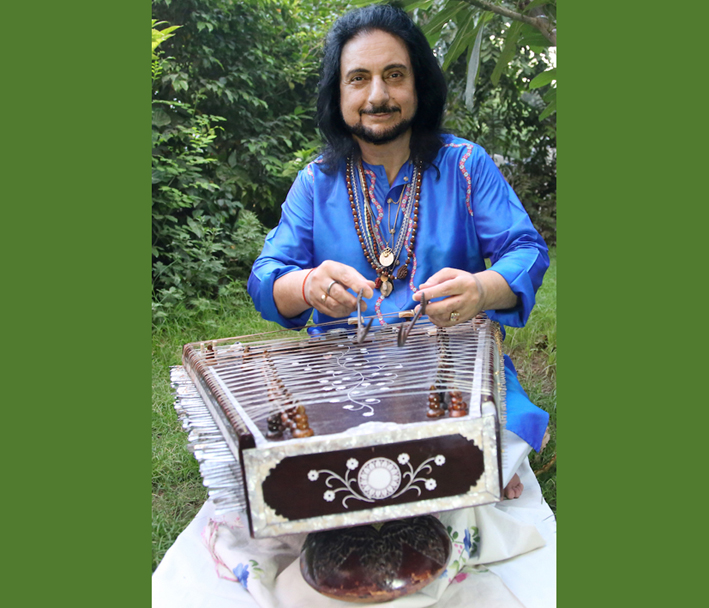 JAMMU, May 27: The cultural face of Jammu and Kashmir, Pandit Bhajan Sopori has made a new raga `Hem Rast’, which is a beautiful combination of Raga Hemant of Indian classical and Muqam Rast-e-Kashmiri of Sufiana Mausiqi.
“Just as Himgiri (Himalaya) touches Kashmir through its inner region, similarly Rast-e-Kashmiri in its Purwang combines with Hemant to form Hem Rast. The raga will be released soon for music connoisseurs and is a tribute to my homeland Jammu & Kashmir”, said Pt Sopori.
Titled as the ‘Saint of Santoor’, Pt Sopori represents the 300 years old mystic musical Shaivite-Sufi tradition of Sopori-Sufiana Gharana of Kashmir, which is a blend of Sufiana Mausiqi, Hindustani Classical music as well as spiritual side with expertise in sound therapy.
He gave his 1st public concert at a tender age of five in 1953 in Srinagar when people heard Hindustani Classical music being played on Santoor in a concert for the first time followed by his 1st Radio broadcast through Radio Kashmir Srinagar in children’s programme at the age of six. This was also the first ever Radio broadcast of Classical Santoor recital through All India Radio. Steeped deeply in the Shaivite-Sufi Parampara (tradition) by way of his Gharana and also his own spiritual leanings, he started performing for Shaiv-Sufi saints in Kashmir at a very tender age. He has since then composed the works of most of the legendary Shaivite and Sufi saints & poets of national and international level, classic and contemporary writers like Lalleshwari, Nund Rishi (Sheikh-ul-Alam), Parmanand, Krishan Joo Razdan, Swami Aftab Joo, Prakash Ram, Wahab Khaar, Rasool Mir, Ghani Kashmiri and others.
Pt. Sopori’s propagation of music brought a revolution in the world of music and he established a system for solo performance, voice culture, composition, arrangement, orchestration, conducting, designing of choral music, etc. He along with his son Abhay have also been in the forefront to mobilize resources through his charity concerts for various medical and social causes and also catastrophes like Kashmir earthquake, J&K floods. He has received hundreds of awards and thousands of felicitations.