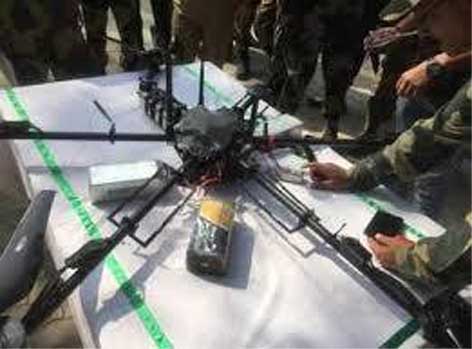 Name any trick, artifice, deceit and delude , Pakistan leaves none of those to employ to further its nefarious designs against this country. It obviously cannot do without it since treachery, deception, conspiracies and distortions are its state policies. Since its almost all channels to send arms into this part of the IB and the LoC have been increasingly contained and blocked by Indian security forces and its mercenaries and trained terrorists getting killed and the remaining ones starving of the arms , Pakistan has resorted to cheap but novel manoeuvring of attempting to send in arms using drones as a ‘convenient’ mode. Its such major attempt has been thwarted by the vigilant BSF on the International Border at Pansar in Rathua area of Kathua district by shooting down a Chinese made Hexacopter that was pressed into ‘service’ for the nefarious deed.
This machine ostensibly was used by Pakistan to smuggle arms, ammunition and explosives into Jammu and Kashmir including US made M4 carbine machine which its agents in the valley – the militants use in snipping incidents. As to how the lethal M4 rifle reached Pakistan which it chose to smuggle into Jammu and Kashmir is a matter of deep and wider sensitive investigation. It may be recalled that a few such attempts were made by Pakistan on Punjab border too a few months back which was detected and thwarted well in time by the security forces and the fresh attempt to do so in this sector, the first of its kind, too stands smashed and exposed. However, it is learnt that the consignment was to be picked up and’handled’ by a militant code named as Ali Bhai who is said to be affiliated with Jaish-e-Mohammad terror outfit. Since the over ground supporters or facilitators are continuously on the radar of the security forces, the extremist zealot did not turn up at the site. This could be possible due to his mentors from across the border having informed him about their perniciously diabolical design having failed due to downing of the Chinese small carrier by the BSF.
Since we are having a treacherous neighbour that can never be trusted even in seemingly assured normal conditions , what is required is to intensify the vigil and guard along the International Border to track down and apprehend the agent saboteurs and militants who could be hiding in burrows to pick up such consignments to replenish the fast depleting arms and ammunition of residual militants, now desperately and crazily fighting the last, silly and lost ding dong, called in their parlance something like “Aazadi”, in Kashmir valley. On a mission to resist and neutralise any element resorting to gun for mayhem and violence against the innocents , the armed forces are taking head on the militants in various encounters after the latter refuse to surrender , it becomes quite redundant and wasteful on the part of Pakistan to continue with its same obsolete , worn out, ridiculous imprudent and foolish tactics of sending arms, ammunition and armed infiltrators to create violence and trouble in Jammu and Kashmir.
Those young persons in the valley who continue to be still ignorant and oblivious of the tricks played by Pakistan against their future and career in their lives ahead, must rethink and return to mainstream in response to the virtual fervent appeal, freshly made by the DG Police and GOC 15 Corps to them. Only then, can Pakistan come to its knees and get fully flattened and irreversibly vanquished in its proxy war with India .
However, the timely action of the BSF in nipping in the bud the Pakistani planning of smuggling in of weapons through drone prevented the militants from launching an attack within a shortest possible time had these weapons reached them. Security experts, however, did not appear to rule out an attempt to carry out an immediate attack by militants using these weapons as dropping weapons through drones is a new ploy resorted to by Pakistan adding new dimensions to its State policy to promote and sustain terrorism on this side of the IB.

Contractors and clearance of bills