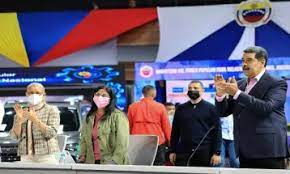 ISLAMABAD, May 21: Pakistan Prime Minister Shehbaz Sharif and his son & Punjab Province Chief Minister Hamza Shahbaz will face hearing in a money-laundering case in the special court on Saturday.
The father-son duo has arrived in the court, along with Interior Minister Rana Sanaullah, amid tight security. They are likely to be indicted in the case today, said Geo News.
In December 2021, the Federal Investigation Agency of the country had submitted challan against the duo before the special court for their alleged involvement in a sugar scam case worth 16 billion Pakistani rupees.
According to FIA report, the team has “detected 28 benami accounts of the Shehbaz family, through which money laundering of Rs 16.3 billion was committed during 2008-18. The FIA examined the money trail of 17,000 credit transactions.”
According to Geo News, the amount was kept in ‘hidden accounts’ and given to Shehbaz in a personal capacity. This amount has nothing to do with the sugar business (of Shehbaz family), it added.
FIA alleged that the money received from the accounts of low-wage employees by Shehbaz was transferred outside Pakistan via hundi/hawala networks, ultimately destined for the beneficial use of his family members.
“Eleven low-paid employees of the Sharif group, who ‘held and possessed’ the laundered proceeds on behalf of the principal accused, are found guilty of facilitating money laundering. The three other co-accused of the Sharif group also actively facilitated the money laundering,” it added.