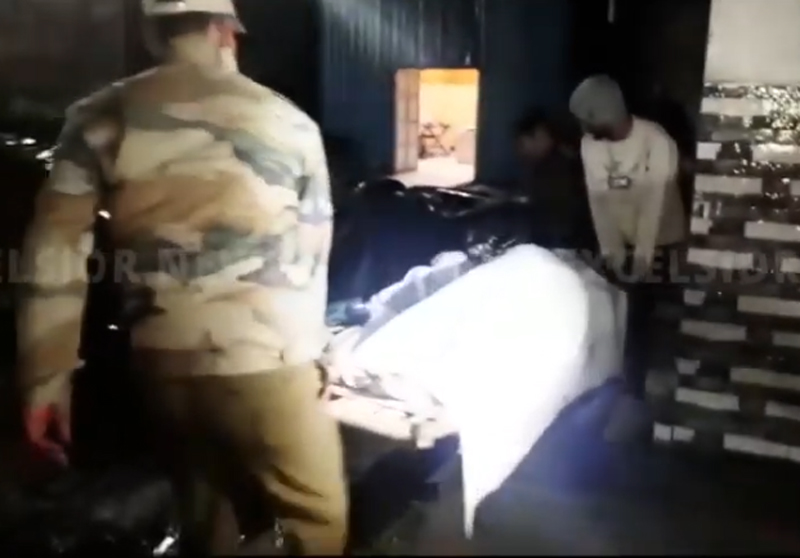 JAMMU, Dec 13: The Border Security Force (BSF) today gunned down a Pakistani intruder on Zero Line of the International Border in Mangu Chak area of Samba district when he tried to intrude into the Indian territory while two Army personnel were injured in Pakistan shelling and firing on the Line of Control (LoC) in Keri sector of Rajouri district last night.
Official reports said the alert BSF jawans observed movement of an intruder in forward area of Mangu Chak in Samba district during wee hours of this morning and challenged him to surrender. Click here to watch video
As there was thick fog in the area and it was also raining heavily, the intruder tried to escape prompting the BSF jawans to open firing in which he was killed.
Late in the afternoon, body of the intruder was recovered from the site of encounter by the BSF personnel and handed over to the Ghagwal police for identification and post-mortem. However, identification of the intruder couldn’t be established immediately as he was not carrying any identity card with him.
The intruder was not in possession of any weapon.
The BSF has been maintaining very high alert all along the International Border following inputs that the militants were planning to infiltrate into the Indian territory from the border to carry out terror attacks.
There had been reports that number of militants were camping at launch pads across the International Border on Pakistan side.
Meanwhile, two Army personnel were injured in heavy shelling and firing by the Pakistani troops on the Line of Control in Keri sector of Rajouri district last night.
Pakistan army was reported to have opened firing and shelling targeting forward posts of the Indian troops and civilian areas in Keri sector. The Indian side retaliated effectively, leading to heavy exchanges that lasted about an hour.
The jawans, according to reports, suffered minor injuries and were evacuated to local formations for treatment. Their condition was stated to be stable. However, their identity couldn’t be ascertained immediately.
Casualties suffered by the Pakistan army in retaliatory firing by the Indian side were not known.
There has been spurt in ceasefire violations by Pakistan army on the LoC in twin border districts of Poonch and Rajouri since August 5 when the Central Government had scrapped special Constitutional provisions of Jammu and Kashmir and bifurcated the erstwhile State into two Union Territories of J&K and Ladakh.
In retaliatory shelling and firing by the Indian Army, Pakistani troops have suffered huge casualties and infrastructural damages.