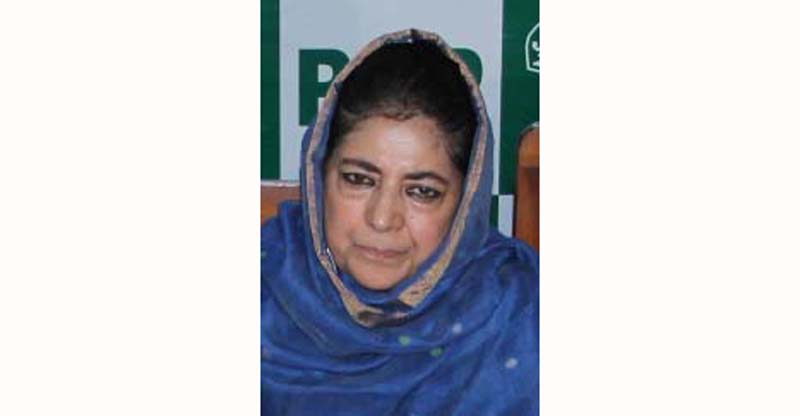 Gopal Sharma
JAMMU, Sept 13: While accusing the BJP of turning J&K into a prison, People’s Democratic Party president and former J&K Chief Minister, Mehbooba Mufti today said that BJP doesn’t allow anybody to speak for the public cause or against it. She claimed that only PDP’s self-rule formula can resolve the issue of Jammu and Kashmir without compromising the sovereignty of India and Pakistan.

Click here to watch video
She said her party (PDP) would take a decision on pre-poll alliance only after the bugle for the Assembly elections is sounded in Jammu and Kashmir. She further insisted that their alliance/ coalition under Peoples Alliance for Gupkar Declaration (PAGD) was meant for restoration of Article 370 and not for the elections.
Talking to media-persons here today after felicitating newly appointed general secretary, Abdul Rashid Malik and Provincial youth president and coordinator of all frontal organisations Parvez Waffa, Mehbooba said the self-rule started the day former Prime Minister Atal Bihari Vajpayee opened Srinagar-Uri-Muzaffarabad and Poonch-Rawalakot cross-LoC routes.
“It was regarded as the biggest Confidence-Building Measure, as the bus service was started on the Srinagar-Muzaffarabad route in Kashmir in April 2005 and the Poonch-Rawalakot route in the Jammu region on June 20, 2006 to facilitate divided families on either side of the LoC to meet each other. The cross-LoC trade between the two sides started in October 2008,” she added.
The cross-LoC trade and bus service, however, remained suspended since April 2019 after India cited misuse of the trade routes by Pakistan-based elements for supplying weapons, fake currency and narcotics.
“Nobody can stop the self-rule. If you want to resolve the issue of J&K under the Constitutional framework, self-rule is the only option which can find a solution to the issue without changing the boundaries or compromising the integrity of both India and Pakistan,” former J&K Chief Minister said.
While defending her father, Mufti Mohammad Sayeed’s (ex-CM) decision to form a Government with the BJP which ultimately collapsed in 2018, Mehbooba said he had not become a supporter of the BJP but joined hands with Prime Minister Narendra Modi, wishing that he would tread the path that Vajpayee had shown to resolve the J&K problem.
“He (Mufti Sayeed) took a decision keeping in view the prevailing J&K situation, the mandate of the people, Vajpayee’s record and the need for dialogue for resolution of the J&K problem. Mufti thought for the people of Jammu who have voted in favour of BJP and cannot be sidelined,” she added.
Mehbooba said Mufti Sayeed had spent a lot of time in Jammu and always desired to see Jammu and Kashmir united. “I am regularly visiting Jammu to meet the public and expose the BJP which is out to divide people on the basis of religion. We are secular and if you want to see any biggest secular place it is Jammu where all faiths live together. Kashmir was once known for its secularism but unfortunately that atmosphere is not there at present,” she said.
On the next Assembly elections, she said only Prime Minister Narendra Modi, Home Minister Amit Shah and their industrialist friends know about the timing of the elections.
On being asked about the possibility of formation of a third-front against the BJP, former J&K Chief Minister said, “We have a coalition under the banner of PAGD, with National Conference, CPI(M), CPI and Awami National Conference. We have not done this for elections. The alliance is for the restoration of Article 370 and Article 35A. Any electoral alliance within the amalgam can be decided only when the poll bugle is sounded,” she claimed.
Mehbooba further alleged that the BJP had turned Jammu and Kashmir into a prison. She said dozens of persons have been jailed and many had to visit police stations.
“You are unable to speak; journalists and activists are being jailed and slapped with Unlawful Activities ( Prevention) Act and politicians are being silenced. The people are now understanding that BJP is violating the Constitution,” she alleged.
“Everyone is being kept under surveillance and they are claiming that everything is alright. Even the Bar Association members or traders, who raised voice for their cause are being harassed. They say that stone pelting has ended, does stone pelting is expected in a jail?” she asked.
On being asked about her reaction to the statement of former Chief Minister Ghulam Nabi Azad on Article 370, Mehbooba said, “Nothing is impossible. Those who are today distributing certificates of nationalism were the same who were not in favour of fighting the British rule but India got freedom because people like Mahatma Gandhi, Pandit Jawaharlal Nehru, BR Ambedkar and Sir Syed Ahmad Khan were determined in their fight for independence.”
It is pertinent to mention here that at his maiden rally at Baramulla after quitting the Congress party recently, Azad had on Sunday slammed those promising the restoration of Article 370, saying it was not in their hands and that he would not mislead people over the issue.
“He (Azad) has his own opinion. There are some people who have accepted the BJP narrative,” she remarked.
Mehbooba said he (Azad) might not have come across the developments in Nagaland where the BJP is having dialogue with the same group which was responsible for blowing up an Army vehicle carrying 18 personnel, and is now contemplating to accept their demand for a separate Constitution and a flag.
Replying to another question, Mehbooba said BJP has nothing to offer to the people as it has miserably failed on providing jobs and controlling inflation. “If the situation continues like this, we might become `Vishwaguru’ in breaking mosques, rather than in other things,” she asserted.
The former Chief Minister alleged that barring two people, the countrymen are getting poorer with each passing day and to divert the attention, the BJP was playing communal card to pit Hindus and Muslims against each other.