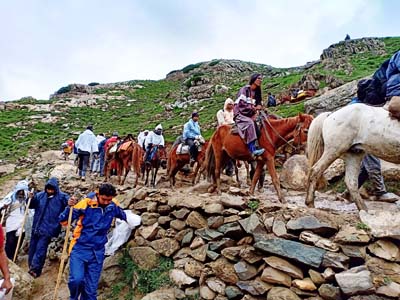 Excelsior Correspondent
JAMMU, July 20:  Over 7000 pilgrims paid obeisance at the holy cave of Swami Amarnath situated in deep Himalayas in South Kashmir district of Anantnag on 23rd day of darshan today.
According to an Officer on yatra duty, 7742 pilgrims from twin tracks of Baltal and Chandanwari performed darshan at cave shrine till this evening. He said till date 2,24,340 pilgrims have performed darshan of Ice Lingam in the cave shrine situated at an altitude of 3880 meters.
He said the yatra is proceeding smoothly from both the tracks and weather was dry during the day except it drizzled in the evening hours for some time. However the yatra was not disturbed and it proceeded smoothly.
He said near 4000 pilgrims left for the holy cave from twin base camps of Nunwan-Pahalgam,  Baltal and by chopper today. Out of them 1994 left from shortest Baltal track while 1100 left from 32 km long Chandanwari -Sheshnag track. Besides, 931 pilgrims left by chopper.
While the pilgrims who left by chopper and Baltal track performed the darshan in the holy cave today those who left via Chandanwari track will stay for two nights at Sheshnag and Panjtarni transit camps .
He said the pilgrims staying at the transit camps of Chandanwari, Sheshnag and Panjtarni left for their onwards sojourn early this morning.
He said over 7000 pilgrims are staying at Baltal for night while 5268 left for Srinagar this morning on way to their home states. The majority of pilgrims who performed darshan at holy cave during the last 23 days have reached their home states safely, he added.
He said 1110 pilgrims are staying at Nunwan Base camp for night.
One pilgrim identified as Sugreev of UP died at holy cave early this morning due to cardiac arrest, the officer said. He said his dead body has been shifted to mortuary at Sonamarg Hospital in Ganderbal district of Central Kashmir and it will be handed over to family tomorrow for last rites, he added.
With this the total number of pilgrims who died during ongoing yatra has reached 27, he said.
Meanwhile, a fresh batch of 1753 pilgrims left for twin base camps of Nunwan-Pahalgam and Baltal from Bhagwati Nagar yatri Niwas here under tight security measures early this morning.
Yatra Nodal Officer, Arun Manhas said that these pilgrims will leave for holy cave from the respective base camps tomorrow morning. He said 1476 pilgrims including 78 Sadhus were registered at three registration centers at Jammu today. There will be near about 1500 pilgrims staying in the Winter Capital for night, he added.