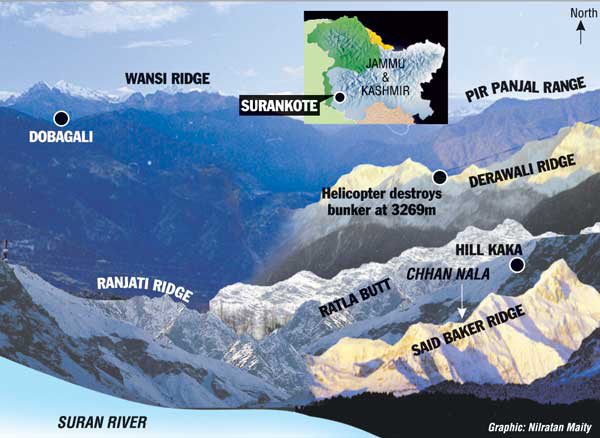 K D Maini
23rd May 2003 is the memorable and fateful day for Indian Army when so called headquarter of Pir Panchal Regiment of Pakistan sponsored terrorists in ‘Hill Kaka Bowl’ in the heart of Pir Panchal range of mountain was stormed by Romeo force under the command of Major General H.S. Liddar, with the help of air force and local tribal group of Fazal Din Tahir. The headquarter of terrorists of various outfits was captured where the terrorist had created Kargil type situation in the heights of Pir Panchal range. From this very base camp, the terrorist were operating in Kashmir Valley, Chaneb Valley and Pir Panchal region of Rajouri and Poonch.
This well-conceived operation against terrorist was initially started on 22nd February 2002 and after further preparation during the winter of 2003, the forces penetrated in Hill Kaka Bowl (63 km in length and 37 km in breadth) from April 2003 onward and finally destroyed the base camp of Pir Panchal regiment at Hill Kaka village on 23rd May 2003. The Indian Army not only captured the headquarter of foreign terrorists, destroyed 73 hideouts in Dhoks (Cluster type hutments in the forest area)7 training camps around Hill Kaka village and also got released 15 hostages from the base camp. 78 terrorist were killed during the operation. As per tribal groups,about 200 terrorists along with their logistic supporters escaped from Hill Kaka before the start of Operation Sarpvinash. Therefore the Pir Panchal range of mountains was cleared from the terrorist, the roots leading towards LOC were plugged and the passes opening towards Kashmir Valley were closed and dominated all important heights of Pir Panchal range of mountain so that no such type of scenario was repeated by Pakistan in this area.
This was a very big and bold operation of Army, Airforce and local Tribal groups conducted successfully against foreign terrorists in a very hostile and inaccessible terrain, heights, and forest area. The backbone of militancy was broken because at this very base camp the foreign terrorist were assembling after crossing LOC, recruiting local youth, providing them armed training, and then deploying for terrorist activities. These terrorist created havoc from 1999 to 2003, killed minorities and nationalists Muslims. However after Operation Sarpvinash, the activities of terrorists were reduced to great extents, and local recruitment was stopped. The terrorist not only lost their Headquarter and main battlefield but also lost reputation and support of local public who were forcefully using them for logistic support. The public in the villages got great relief, simultaneously State and Centre Governments took proper administrative measures, gearedup development activities and initiated political process.
After operation Sarpvanash of 23rd May 2003 and decamping the militants from the heights of Pir Panchal ranges, Pakistani leadership realized that they have lost proxy war in J&K State. Therefore President Parvez Musharraf started talking for peaceful relations with India and ultimately declared uni-lateral ceasefire on the LOC on 23rd November 2003. Actually this was the result of successful operation Sarpvanash conducted against terrorists due to which peace prevailed for about 10 years on LoC and inside J&K.
It is said that in second phase of proxy war, ISI conceived a Kargil type Covert operation in Pir Panchal range of Mountain to destabilized the whole J&K State. In 1997, a ISI general with code name of Musa had visited Pir Panchal range and Hill Kaka Bowl which starts from Bagla top in Beram Galah and goes up to Sankh top in Loran area. This ‘Bowl ‘was cutoff from all the sides and inaccessible. There was no road link, no local administration and the area remained depopulated for about seven months accept Hill Kaka village with 91 households. This ‘bowl’ opens towards Kashmir valley in the north, Poonch Rajouri in the southern side while the western side was nearer to LOC and convenient for land link with Pakistan through route passes. Therefore Hill Kaka Bowl was gradually converted by ISI into a base camp of number of terrorist outfits. The foreign terrorist after crossing LOC were reaching the base camp named as the Headquarter of Pir Panchal regiment. At this base camp they were recruiting local Youth forcefully and labour class for logistic support and then operating in Kashmir valley, Poonch Rajouri area and Doda Kishtwar Districts. This biggest terrorist hideout established in 1999 continued till the operation Sarpvanash. These terrorist harassed and terrorized the local tribal people residing on the slopes of Pir Panchal Range. Ultimately these tribal people revolted against terrorist. Around 2002 a vibrant Tribal group of Murrah and Marhote under the leadership of Fazal Din Tahir went to Delhi,met the then deputy Prime Minister and Home Minister Lal Krishan Advani and narrated about the atrocities of terrorists. They also placed their services on the disposal of security forces so that they could getrid offrom militants. Accordingly the home ministers directed security forces for appropriate action. No doubt that the security forces deployed in this area were already on the job and conducting operations but they were not in a position to chase the militants on the heights, and forest areas of Pir Panchal range because for this purpose there was a need of bold action.
Therefore on the direction of Central Government Romeo force conceived a large scale operation after proper planning and with the involvement of Airforce and support of local tribal groups for specific information about the terrorist,this operation was launched in a big way and finally the whole Pir Panchal range including Hill Kaka Bowl was got cleared from the terrorist. General Y. M Bomai writes in his Book ‘ War against insurgency and terror in Kashmir’ that operation Sarpvanash was large scale and most successful in which the terrorist lost all hideouts, training camps, motivational centers and the headquarter of so called Pir Panchal regiment. In this operation the Para trooper Sanjyog Chittri displayed outstanding bravery and courage for which he was awarded Ashok Chakra.
feedbackexcelsior@gmail.com