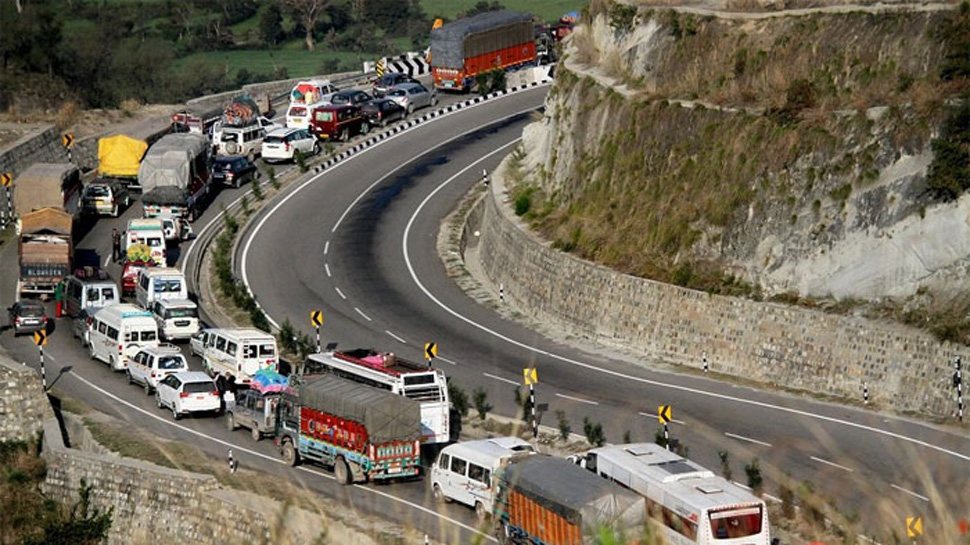 SRINAGAR: No fresh vehicle will be allowed on Srinagar-Jammu national highway on Sunday before all Kashmir bound several thousand stranded vehicles, including trucks loaded with essentials, are cleared as today is a convoy day.
Meanwhile, only one-way traffic will continue to ply on national highway, connecting Ladakh region with Kashmir and historic 86-km-long Mughal road linking Shopian in south Kashmir with Rajouri and Poonch in Jammu region, a traffic police official said.
He said traffic on the Kashmir highway was suspended due to landslides, triggered by rain at Battery Cheshma and another place in Ramban area on Saturday morning. More than 3,000 vehicles, mostly trucks carrying essentials and oil tankers got stranded on the highway.
However, the National Highway Authority of India (NHAI) and Border Roads Organisation (BRO), responsible for the maintenance of the highway, immediately put into service machines and men and finally put through the road last evening. Few hundred vehicles passed the troubled area before traffic was again suspended due to darkness as night travel is not allowed on the highway to avoid any accident.
Today when there was Convoy Day, only Kashmir bound stranded vehicles were allowed to move. The government had imposed ban on civilian traffic twice in a week on Sunday and Wednesday to allow free movement of security force convoy.
The ban was imposed after 44 CRPF personnel were killed in a fidayeen attack in February at Awantipora in Pulwama on the highway. However, the Wednesday ban was lifted early this morning. Now government had already announced that there will be no ban on civilian traffic movement from first Sunday of June.
Official said decision to allow fresh traffic will be taken only after all stranded vehicles are cleared, he said.
Traffic official said Mughal road, also seen as alternative to Srinagar-Jammu national highway, was through for one-way traffic and today only Kashmir bound vehicles were allowed to ply. However, the Light Motor Vehicles (LMVs) were asked to leave Behramgalla for Kashmir between 0500 hrs to 0900 hrs followed by Heavy Motor Vehicles (HMVs) from 0900 hrs to 1500 hrs. No vehicle will be allowed from opposite direction, he said.
Today traffic was allowed from Leh to Kashmir on the highway, connecting Ladakh with Kashmir, he said adding LMVs had to cross Minimarg between 0700 hrs to 1000 hrs and HMVs 1000 hrs to 1300 hrs. No vehicle will be allowed from opposite direction and deadline. (AGENCIES)