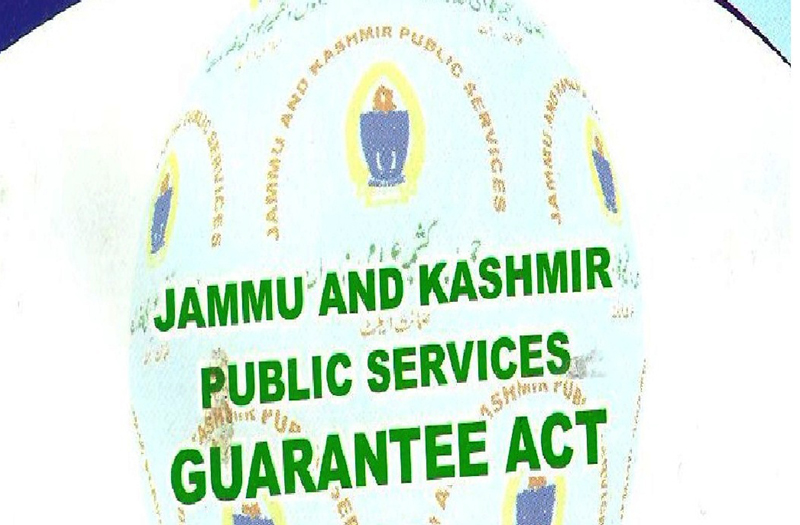 Amendments carried out in Rules of 2011
*New provisions will also apply to Second Appeals, Revisions

JAMMU, Aug 6: The Government of Union Territory of Jammu and Kashmir has linked online services of all the departments with the timelines laid down under Public Services Guarantee Act (PSGA) by carrying out amendments in the Rules of 2011. The amendments will also be applicable to the Second Appeals and Revisions.
Official sources told EXCELSIOR that when Jammu and Kashmir Public Services Guarantee Act was enacted and Rules were framed way back in 2011 very few services were being offered to the public by the Government departments through online or electronic mode.
During the past few years, large number of services of several Government departments have been made available online and accordingly the Lieutenant Governor Manoj Sinha felt is imperative to get linked online services with the timelines laid down under the Public Services Guarantee Act.
Accordingly, the General Administration Department today issued notification carrying out amendments in the Jammu and Kashmir Public Services Guarantee Rules, 2011.
“In exercise of the powers conferred by Section 17 of the Jammu and Kashmir Public Services Guarantee Act, 2011, which confers powers for making Rules for carrying out the provisions of the law, the Government directs that the amendments shall be made in the Jammu and Kashmir Public Services Guarantee Rules, 2011”, read the notification issued by the Principal Secretary to the Government, General Administration Department Manoj Kumar Dwivedi.
After Rule 3, a new Rule 3A(1) has been inserted and this Rule states: “Wherever any service notified under Section 4 of the Act is being provided online or by electronic mode by any department, the provisions of the Act and Rules 3,4,8,12,13,14,15 and 16 shall mutatis mutandis apply to such service”.
“Non-providing of such service or rejection to provide such service by the Designated Officers within the specified time-limit shall be automatically transmitted electronically to the Appellate Authority, Designated Officers as well as applicant and Appellate Authority shall accordingly, in an electronic mode, proceed and exercise its appellate jurisdiction as per the provisions of the Act and the Rules”, the new Rule further read. These provisions shall also be applicable to the Second Appeals and Revisions.
The Section 4 of the Public Services Guarantee Act, which deals with notification of public services and time limit, read: “The Government may, from time to time, specify the services to be the public services for purposes of the Act and shall specify the time limit within which such services shall be provided to the eligible persons. For providing services specified under Sub-Section (I), the Government may for different areas and for different services designate officers who shall be responsible for providing each of such services to the eligible persons”.
Rule 3 pertains to authorization by Designated Officer for receiving the application while as Rule 4 deals with issuing of acknowledgement to the applicant. Similarly, Rule 8 deals with contents of application for appeal and revision and Rule 12 pertains to hearing of appeal or revision. Rule 13 and Rule 14 pertains to order in appeal or revision and recovery of penalty. The aspects relating to payment of compensation and maintenance of record of disposed cases under the Act are covered by Rule 15 and Rule 16.
The provision of the Act relating to Second Appeal states: “Any person aggrieved by the order passed by First Appellate Authority may prefer an appeal to the Second Appellate Authority within 60 days from the date on which the order appealed against has been passed: Provided that the Second Appellate Authority may admit an appeal after the expiry of the period of 60 days, if it is satisfied that the appellant was prevented by sufficient cause from filing the appeal in time. The Second Appellate Authority may, within forty-five days from the date of presentation of appeal, pass an order directing the designated officer to provide the public service within such time as it may specify or to remove the deficiency in the service provided to the appellant or may pass such other order including the rejection of appeal, as it may deem fit”.