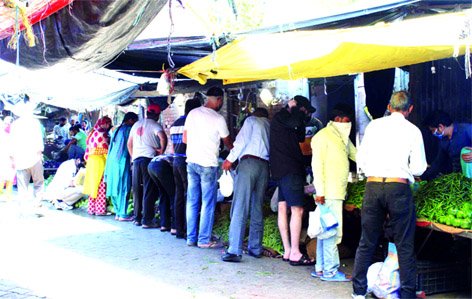 Shiv Chander Sharma
Where once royal elephants were  kept during Dogra Royal period  has now become main Sabzi Mandi  of the Jammu city, these days.  Situated in the heart of old Jammu  city near Parade with Moti Bazar  on the other side, a large open  area was once called Hathi Khana
during the period of Dogra ruler  Maharaja Pratap Singh (1885 AD to
1925 AD).
Pratap Singh is known for his great vision in the history of the state and the credit of introducing two main colleges in the state, one in Jammu city and other in Srinagar city goes to him. Moreover, he had called British surveyors to probe the possibilities of railway line between Jammu and Kashmir. The first rail line in the state between Sialkote and Jammu was also laid during his time.
The royal seat during those times remained at Mubarak Mandi Palace which served both the Royal court and residential palace. And the then Hathi Khana is not more than a km away from the Palace. The elephants were kept at this place and used to be tied below a large banyan tree which still exists at the same place.
However, the difference between then and now is where elephants were tied, now vegetable sellers sit to sell fresh vegetables daily. The side gates of Hathi Khana of those times still exist but are generally ignored by the people who come here to buy vegetables daily or weekly basis or so. The tree is located in the centre of the inner cirle of the present Sabzi Mandi.
An octogenraian, Parmanand, a vegetable and fruit mechant says that he had his shop just near that tree where elephants were kept during royal period. He, however, said that when he started the business at that place it was post independence period but he has seen elephants tied at this place when he was a child and even teenager.
Recalling his memories Parmanand said that during those days it was difficult even to enter this area where royal guards were always on the duty. Mahaout also used to stay there. But now this place is frequented by thousands of people daily as vegetbales and fruit are always cheaper and fresh as compared to other parts in the city. Before the wholesale vegetable and fruit market shifted to Narwal, this was the wholesale market in the morning hours and later it was converted into retail market during the day and evening.
However, now this Sabzi Mandi is main retail market and remains open till late evening hours. Some structures have also come up during last few decades at this place including some Municipal quarters besides Dhabas and tea stalls. But the grace of this place during royal period was altogether different, said Ram Lal, a vegetable seller sitting just near the ancient banayan tree. He said, ‘I have seen seen this place during royal period and had never imagnied that one day I will be selling vegetables at this historical spot where royal elephants were tied and Mahaot used to look after them.”
(The author is former reporter, The Indian Express.
and Former columnist Daily Excelsior)