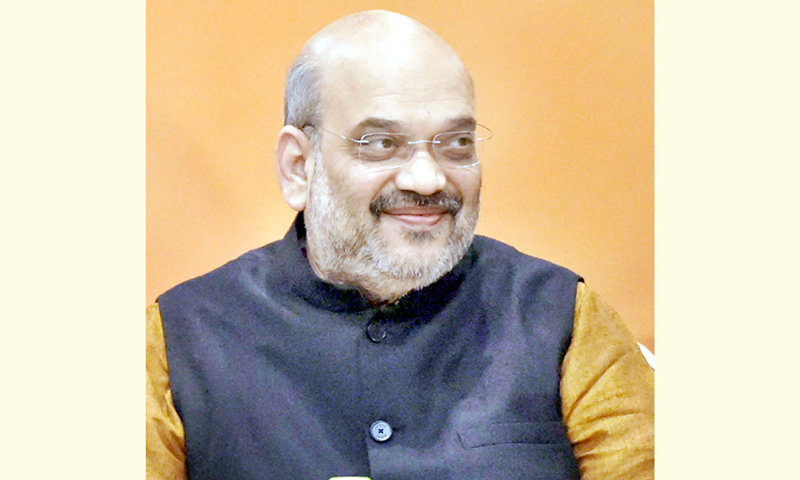 ‘Only 1000 in jails now, 800 of them stone pelters’
None asked parties to boycott BDC polls
Sanjeev Pargal
JAMMU, Oct 15: National Conference vice president Omar Abdullah and People’s Democratic Party (PDP) president Mehbooba Mufti, both former Chief Ministers of Jammu and Kashmir, have been detained under the Public Safety Act (PSA), according to Union Home Minister Amit Shah.
Shah disclosed this in an interview with national English news channel today.
“Omar and Mehbooba have been detained under the PSA,” Shah said, recalling that when he made a statement in the Parliament on August 6 that National Conference president Dr Farooq Abdullah was free, he was indeed free and hadn’t been detained by then.
“He (Dr Farooq Abdullah) was confined to his house on his own. There were no restrictions on him then by the administration, the Chief Secretary, the Director General of Police or the Government of India. For keeping anyone under house arrest, the Government had to inform police within 24 hours. He wasn’t under detention then,” Shah clarified.
The Government had told the Supreme Court that Farooq Abdullah was detained under the PSA later.

Replying to a question on the Block Development Council (BDC) elections in Jammu and Kashmir which were being boycotted by most of the political parties including National Conference, PDP and Congress, Shah denied that the elections have lost legitimacy due to the boycott saying large numbers of Independent candidates were in the fray.
“In many States, the BDC elections are held without party symbol,” he pointed out and said the BDC polls will lead to development at grass root level. Moreover, he added, none stopped the political parties from contesting the elections.
The Home Minister said situation has been completely peaceful in Jammu and Kashmir post abrogation of Article 370 of the Constitution of India.
“Except jurisdiction of six police stations, there have been no restrictions under Section 144, there is no curfew anywhere, no shoot and sight orders were issued after scrapping of Special Constitutional provisions of the State. As far as political rallies and programmes were concerned, it is a practice all across the country that the parties had to take prior permission for them,” Shah said.
Citing another example of normalcy in the Kashmir valley, the Home Minister said apple season is smooth, traffic was moving on roads, bazaars are open, people are offering Friday prayers, mobile telephones and voice calls have been restored and both Jammu and Kashmir divisions were peaceful.
On detentions, he said out of 4000 preventive detentions made post abrogation of Special Constitutional provisions of Jammu and Kashmir, now less than 1000 were in jails and 800 of them were stone pelters.
Referring to Congress criticism of detentions of political leaders, the Union Home Minister, who also happens to be the BJP national president, averred: “Even when Article 370 existed, Sheikh Abdullah was kept behind bars for 11 years and the Congress used to justify arrest on the ground that he could instigate the people. Today, when some leaders have been detained for last two and half months, the same Congress is creating uproar”.
On whether wrong message was going about large detentions in the Valley, Shah asked: “What message went outside when 40,000 persons were killed in Kashmir”?
Replying to a question on his oft-repeated remark that not a single bullet was fired in Kashmir and no casualties took place after Central Government’s decisions on Jammu and Kashmir since August 5, Shah reiterated that no killing took place in the bullet firing.
PTI adds from Gurgaon: The abrogation of Article 370 provisions is a “decisive battle” waged by the Narendra Modi Government to end years of Pakistan-sponsored proxy war and terrorism, and it will bring long-lasting peace in Jammu and Kashmir, Union Home Minister Amit Shah said today.
Attending the 35th Raising Day celebrations of the counter-terror force NSG as the chief guest here, Shah said the recent decision to repeal special provisions in J and K will help “completely eradicate” Pakistan-supported terrorism from the Kashmir valley.
The Minister said his Government is firm on the policy of “zero tolerance” on terrorism and to defeat all its forms.
The National Security Guard (NSG) is an important instrument to achieve this goal, the Minister said.
“I believe that with the abrogation of Article 370 by PM Narendra Modi, we have initiated a decisive battle against years of proxy war and terror acts perpetrated by our neighbour (Pakistan) and this step will ensure long-lasting peace in Kashmir and the region,” Shah said at the NSG garrison in the Manesar area here.
He said India has been facing terrorism for many years and there would be very few countries across the globe who have waged such a long battle against terrorism.
Terrorism is a curse on any civilised society and the biggest impediment to development, he said.
“Hence our Government is firm on continuing the zero tolerance policy on terrorism and ensuring victory on terror always,” Shah added.
The recent big step of repealing Article 370 taken by Modi is aimed at completely eradicating terrorism from Kashmir and to safeguard the country from this scourge, Shah said.
Shah lauded the elite commando force saying it has impressed the world with its capability to counter any terror attack as he recounted its operations at Akshardham temple in Gujarat and the 26/11 attacks in Mumbai in 2008.
“This inspires confidence in the minds of the citizens that they are in safe hands,” he added.
The Home Minister said the NSG has been provided with latest gadgets and equipments to enhance its mobility surveillance, firepower and counter-drone capabilities but a commando’s courage, passion and and patriotism is the most important quality that ensures victory in an operation or task.
He asked the NSG to continuously work towards its vision of “world-class zero error” force.
The force was raised in 1984 as the federal counter-terror and counter-hijack force with specialised ‘black cat’ commandos to render these tasks.