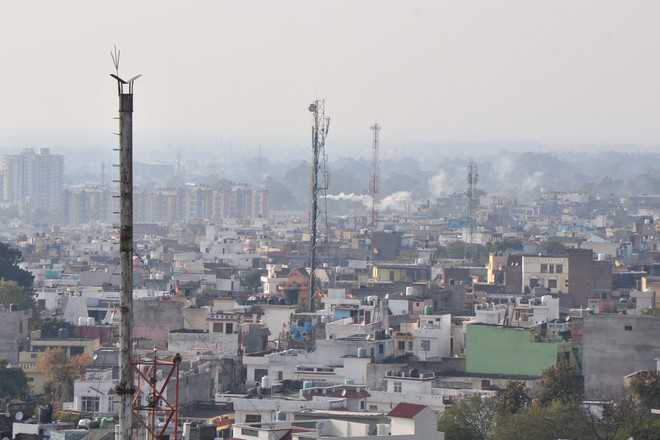 Action awaited on several vital points of Action Plan
Lack of coordination, non-seriousness persist at almost all levels
Mohinder Verma
JAMMU, Oct 15: Notwithstanding the fact that air quality of Jammu and Srinagar cities is worsening continuously because of varied reasons, no action is being taken on several important steps identified in the Action Plan, which was prepared early this year in compliance to the directions of the National Green Tribunal. Moreover, there is no end to the lack of coordination between the Government agencies although they are supposed to work in unison so as to minimize the air pollution.
Official sources told EXCELSIOR that on the basis of air quality data submitted by the State Pollution Control Board through Environment Data Bank under National Air Monitoring Programme, Jammu and Srinagar have been declared as non-attainment cities by the Central Pollution Control Board for violating the standard permissible norms for Respirable Suspended Particulate Matter (RSPM).
As per the Central Pollution Control Board, Jammu and Srinagar cities have the level of air pollutants towards higher side as such violate the standard permissible limits. Due to this, these cities figure at Serial No.28 and 29 respectively in the list of a total of 104 non-attainment cities across the country.
Taking cognizance of alarming situation, National Green Tribunal on October 8, 2018 issued directions for preparation of appropriate Action Plan to bring the standards of air quality within the permissible norms within six months from the date of its finalization.
In compliance to the directives of the National Green Tribunal, the State prepared Action Plan on control of air pollution in non-attainment cities of Jammu and Srinagar and the same was submitted to the Central Pollution Control Board on March 28, 2019.
In the Action Plan, vehicular emission has been reflected as major cause of air pollution in Jammu and Srinagar cities. The other causes are road dust due to bad road conditions, industrial pollution, construction and demolition activities and garbage burning. Moreover, it has been mentioned in the Action Plan that Jammu district is having maximum number of vehicles registered amongst all the 22 districts of the State.
“However, several important points of Action Plan have yet not received due attention of the concerned authorities as a result of which there is no perceptible improvement in the air quality of twin capital cities”, sources informed, adding “not only this there is even no coordination between the concerned Government agencies, which otherwise have to work collectively so as to achieve the objective behind formulation of Action Plan”.
As far as control of vehicular emission is concerned, thrust has been laid in the Action Plan on phasing out of 15 years old commercial diesel driven vehicles. On the recommendations of the State Pollution Control Board, the Transport Commission vide communication dated March 11, 2019 had submitted the proposal to the Government for banning of commercial vehicles above 15 years of age in the State but proposal could not become reality due to stay from the High Court.
“Thereafter, no serious efforts were made to get the interim direction of the High Court modified or vacated as such there is absolutely no action on the foremost point of the Action Plan”, sources said, adding “even there is no progress on phasing out of 500 diesel driven commercial vehicles of 15 years to 25 years age”.
“In the Action Plan, stress has also been laid on introduction of cleaner fuels like CNG and LPG for vehicles but there is no progress on this aspect also because of several reasons”, sources said while disclosing that the matter was taken up with the Chairman/MD of Gas Authority of India Limited by the Transport Department but the GAIL made it clear that CNG can be provided normally through pipeline.
Expressing inability to specify time-frame for receiving CNG through pipeline, sources said, “the fate of Bhatinda-Jammu-Srinagar gas pipeline project, which was mooted several years back, is still hanging in balance because of certain legal issues”, adding “the most shocking aspect is that this project is not being chased by the concerned authorities of Jammu and Kashmir with the Union Ministry with required vigour”.
They further said, “no doubt Traffic Police has recently launched massive drive to regulate vehicular traffic in both the cities but carrying capacity of roads continues to remain as it was several decades back and this is leading to traffic congestion”, adding “traffic congestion is also one of the major causes of generation of emissions in large quantity”.
“What to talk of major initiatives even short term measures are not being taken by the Municipal Corporations, which as per the Action Plan are required to take steps for controlling road dust”, sources said, adding “regular cleaning and sweeping of all city roads is not being done twice a day as has been mentioned in the Action Plan. Moreover, water sprinkling of dusty roads is a rare phenomenon”.
“All this indicates that Jammu and Srinagar cities’ worsening air quality is nobody’s concern”, sources remarked.