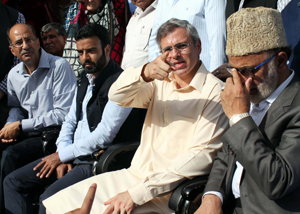 SRINAGAR, June 19: National Conference (NC) today ruled out any support to People’s Democratic Party (PDP) after Bhartiya Janta Party (BJP) pulled out from Coalition Government and urged for Assembly elections in the State.
Addressing reporters after meeting Governor N N Vohra, NC vice president Omar Abdullah said they have neither been approached by any nor would they offer their support to any party. Click here to watch video
Batting for Governor’s rule in the State, Omar said that his party has assured the Governor of their support. He, however, said that elections must be held as soon as possible.
“Today at 2:30 pm, news came that BJP broke the alliance with PDP and the present Government has no majority now. I met with the Governor and told him that we did not have the mandate of forming Government in 2014. If that time we did not got the mandate of forming the Government, so, today we also do not have the mandate of forming the Government”, Omar said.
The former Chief Minister said that he favours Governor’s rule and holding of elections in the State.
“We told Governor that in these circumstances, when there is no mandate for any political party to form Government, Governor rule should be imposed immediately and he should try his best to normalize the situation in the State. I assured Governor that NC will support him in this. But we also told him that the Governor rule should not be imposed for too long as people have right to elect their Government and we also want that Governor and his colleagues should try for normalizing situation in the State, elections should happen and after that the decision of the people will be accepted whole heartedly”, he said.
Omar said that he is not surpised with the fall of Government as he was expecting it. “It is only the BJP that can answer what compelled them to break the alliance. I am not surprised by the decision but it is the timing of the decision which has made me surprised. I had expected this coalition fall apart to a little later in the year and not quite so soon. Over the last one and a half month we had seen a significant deterioration in the situation in State. That might be one of the reasons for the pulling of alliance but beyond that I cannot speculate anything”, he said.
NC leader said that BJP should have taken PDP into confidence before pulling out of Government. “It is a little unfortunate that PDP and BJP worked together for three years; at least they could have taken them into confidence”, he said.
Omar held BJP equally responsible for deterioration of situation in Kashmir. “If this is the reason behind pulling out, they are as much responsible as the PDP is. The PDP did not govern on its own. The situation has reached out today where we are all suffering”, he said.
“We are not celebrating this break up. We are mourning the demise of democracy in the State. We want at the earliest available opportunity that the people should be given a chance to decide their future again”, NC leader said.
The former Chief Minister said that Mehbooba should have walked out of coalition rather than being dismissed. “I can’t speculate it Shujaat Bukhari’s killing or the ceasefire was the final straw that broke the camel’s back. I wish Mehbooba Mufti had chosen to go rather than be shunted like this. She chose to be dismissed rather than leave with some dignity infact”, he said.