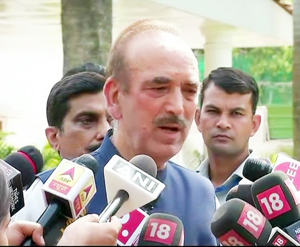 JAMMU, June 19: Former Union Minister and Leader of the Opposition in Rajya Sabha, Ghulam Nabi Azad today said that by holding PDP fully responsible for  ‘all the ills’ and law and order problem in Jammu and Kashmir, BJP can’t shy away from its responsibility  and it committed the ‘Himalayan blunder’ on the day,  it forged alliance with the PDP in 2015 in the J&K State.
Reacting sharply to the developments in J&K with regard  to pulling out of the Government  by BJP, senior AICC leader said, “It is a good that BJP realized its mistake and pulled out of the Government.  It will save the already much damaged Jammu and Kashmir state from further destruction. The day this Government came into existence, I had told the Prime Minister that they were going to commit Himalayan blunder, but he just laughed. Today, my  remarks have proved true,” Azad maintained.
This alliance which is often called as ‘North Pole and South Pole’, even by the late Mufti Mohd Sayeed himself, has brought much damage and  destruction to the State in every respect. The Congress  and NC had tried to bring  this State on the rails of political stability and economic prosperity. In last just three years, they have ruined this State badly. They have proved big failure in every respect, Azad asserted.
Referring to his initiative of three years ago of  forging  ‘greater alliance’ of Cong, NC and PDP to frame Government in the State, keeping BJP away,  Azad said late Mufti  Sayeed had agreed for it and Omar Abdullah had seconded his proposal. ” I had assured on behalf of the party that there will be support to  Mufti Sahib for full term  but let them keep away from BJP. But it was on the instance of Prime Minister, directly or indirectly, that the  local Government in J&K was threatened and told that  they will not get full assistance if they went for other alternatives. They  compelled the  regional party to forge alliance with BJP,” Azad said.
“I had cautioned Prime Minister in first or second week of March 2015 on the floor of the Parliament House that you will be committing Himalayan blunder by forging alliance with PDP, but he just laughed and today my remarks have been vindicated. The regional parties should have been left to themselves. They remained in opposition for 70 years  and had not experience of governance and moreover had not idea of topography or sensitivity of Kashmir.
I had told them  where ever you go, fire go on spreading there. They tried to create communal divide and damage social fabric. The maximum number of ceasefire violations took place during BJP rule along the IB and LoC in J&K, maximum number of civilian and security forces deaths occurred and large number of jawans and people were injured. Law and order has been totally collapsed in the State,” Azad maintained.
Now, suddenly pulling out of the Government and throwing ‘onus on the head of PDP for everything, BJP can’t shy away from its responsibility. “Though I hold PDP  responsible for the present  situation in the State, yet BJP is also equally responsible,” the former J&K Chief Minister said.
Replying to a question with regard to the reason cited by BJP top leader Ram Madhav for breaking alliance with PDP, Azad said, ” These all are  pretexts.  When they  failed on all fronts,  they started trying to find faults. They indulged in massive corruption. Earned crores out of transfers  and  plundered the public exchequer.  The State has been brought to the economic crisis. Its coffers have gone empty.”
Replying to a question whether Congress would frame Government in alliance with PDP, Azad said, “There is no question of forming any Government with PDP. The question does not arise.”
On another question that BJP claiming that its Ministers couldn’t ensure development in Jammu and Ladakh due to PDP and these regions were suffering, Azad said  they had no time from collecting money, Did they ask anything? Did they raise it in the Cabinet  or  on the floor of the House? Did they ever protest in the Cabinet?
“We had run a Coalition Government with PDP, when our DyCM was there, my party was there, how many times late Mangat Ram Sharma walked out from the Cabinet to have balanced development and resolution of Jammu based issues. How many times they (BJP Ministers ) did like this? Now, since they have proved failure,  they are  trying to make lame excuses. The public can not be befooled every time,” Azad maintained.