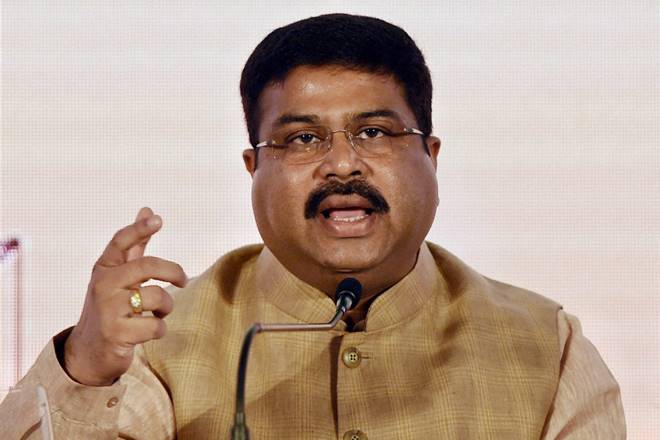 DAHEJ (Gujarat) : Oil Minister Dharmendra Pradhan today ruled out a daily price review of petrol and diesel but said the government was concerned about pinching fuel prices and is working on a long-term solution.
He asked state governments to tax petrol and diesel within a “reasonable and responsible” band and not continue to reap bonanza from rising oil prices.
“There is no review of daily price mechanism,” he said after an event to mark receipt of first LNG cargo from Russia under a long-term contract.
Daily revision in petrol and diesel prices, which was introduced in mid-June last year, had come in for criticism after rates were hiked everyday last month in step with firming international oil rates. It was speculated that the long-term solution being worked out by the government to deal with the volatility may involve review of the daily price review mechanism.
Pradhan said fuel prices have started to decline during the five days but the rates continue to “pinch”.
After hitting all-time high of Rs 78.43 a litre for petrol and Rs 69.31 for diesel on May 29, rates have marginally fallen during the subsequent days on softening in international oil prices and rupee strengthening against the US dollar.
Petrol price has dropped by 47 paisa a litre and diesel by 34 paisa. This compares to Rs 3.64 a litre hike in petrol and Rs 3.24 a litre hike in diesel rates in Delhi in the fortnight after state-owned oil firms ended a 19-day pre-Karnataka poll hiatus to resume daily price revision on May 14.
Petrol in Delhi today costs Rs 77.96 and diesel by Rs 68.97. Prices in Delhi are the lowest among all metros and most state capitals due to lower sales tax or VAT.
“We are thinking of a long-term solution (to price volatility). We are concerned about prices,” he said.     “Government of India is taking a holistic view.”
Asked about CPM-ruled Kerala taking the lead in cutting sales tax or VAT on petrol and diesel by Re 1, the minister said he had welcomed the state government’s move but the issue should not be politicised as in November last year some other states had cut VAT.
State governments, he said, should cut sales tax, which because of their being ad valorem in nature leads to rise in revenues of the state governments when prices rise. Excise duty, charged by the Centre, on the other hand is fixed and does not change with change in retail price.
“We cannot push states but only appeal to them,” he said.
He attacked the previous UPA government for “mismanagement” of the oil economy between 2010 and 2014 that had left for the present government repayments of oil bonds issued to oil companies for subsidising fuel.
“We are concerned about plight of the common man,” he said.
“I have already categorically stated (on) this issue several times. The present oil price hike is due to three main factors. Hike in the international price of crude, fluctuation in the dollar and Indian currency ratio, and some of the tax issues are also there,” he told reporters here.?
He, however, did not elaborate on the solution or the holistic strategy being worked out.
The government had raised excise duty on petrol by Rs 11.77 a litre and that on diesel by 13.47 a litre in nine instalments between November 2014 and January 2016 to shore up finances as global oil prices fell, but then cut the tax just once in October last year by Rs 2 a litre.
The government had in June last year junked a 15-year old practice of revising rates every fortnight and introduced daily revisions which worked well except periods immediately preceding an election.
State-owned Indian Oil Corp (IOC), Bharat Petroleum Corp Ltd (BPCL) and Hindustan Petroleum Corp Ltd (HPCL) were in April 2002 given freedom to revise rates of petrol and diesel on 1st and 16th of every month based on average rate of benchmark international petroleum product prices and rupee-US dollar rates in the preceding fortnight.
The revisions continued till just before the general elections in 2004 when oil companies went slow and after the Congress-led UPA came to power the entire process was reviewed as the international oil prices started moving up. Rates at refinery gate were revised on fortnightly basis but not all of the desired hike was passed on to the consumers and that increase not passed on converted into a subsidy.
The UPA government finally freed petrol price in June 2010 and the diesel rates were decontrolled by the current BJP government in November 2014.
The central government levies Rs 19.48 excise duty on a litre of petrol and Rs 15.33 on diesel. State sales tax or VAT varies from state to state. Unlike excise duty, VAT is ad valorem and results in higher revenues for the state when rates move up.
In Delhi, VAT on petrol was Rs 15.84 a litre, and Rs 9.68 on diesel in April. Today, it is Rs 16.57 on petrol and Rs 10.15 a litre on diesel.
Every rupee cut in excise duty on petrol and diesel will result in a revenue loss of Rs 13,000 crore. (AGENCIES)