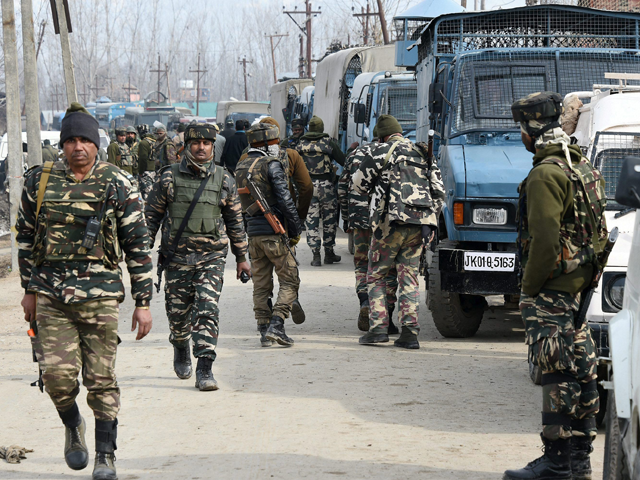 Kashmiri student too under radar

JAMMU, Feb 1: Three Over Ground Workers (OGWs) of the militants arrested yesterday from the encounter site at Ban Toll Plaza near Nagrota on Jammu-Srinagar National Highway have reportedly disclosed during questioning that two of them had transported group of three militants to Kashmir via Dhar Road around 40 days back. Their claim is being investigated by the police.
Police was also looking for another suspect, a Kashmiri student studying in Jammu, who had reportedly been kept standby by the OGWs for transportation of the militants to the Valley if they failed to reach the spot in time.
Police today arrested another OGW, Shoaib Ahmed from Pulwama, whose brother happened to be a militant of Jaish-e-Mohammed outfit, for his links with Sameer Dar, who was driving the truck yesterday while transporting militants from Dayala Chak in Kathua district to Kashmir. Three more suspects have been detained in Pulwama for questioning in connection with yesterday’s killing of three militants.
Reliable sources told the Excelsior that Sameer Dar, who happened to be the cousin of Adil Dar, the Pulwama terror attack mastermind and his associate Asif Ahmed Malik have claimed that they had transported a group of three militants from Dayala Chak to South Kashmir using Dhar Road (Mansar route) about 40 days back.
Dar’s third associate Sartaj Ahmad Mantu, who was accompanying the militants yesterday, was not part of the shifting of militants that time. However, police said they were verifying Dar’s claim as he might be trying to mislead police to derail investigations.
The OGWs were reported to have disclosed that Pakistan has kept the name of infiltration route as `Point 6′ between Dayala Chak and Hiranagar from where the militants had infiltrated on the intervening night of Thursday and Friday and previously in September 2018.
Sources said they were yet to authenticate the claim of OGWs that they had shifted three militants to Kashmir about 40 days back after their infiltration from `Point 6′.
“We are also verifying the claim made by OGWs that a Kashmiri student studying in Jammu was kept standby for shifting the militants to Kashmir after infiltration from the International Border if Sameer Dar and his associates failed to pick up them,” sources said, adding that mobile telephone calls are being tracked to ascertain role of the student.
According to sources, all three slain militants had been directed by their handlers in Pakistan not to strike anywhere on the National Highway unless they are intercepted and reach South Kashmir, where Sameer had identified safe hideout for them.
It may be mentioned here that three Pakistani militants of Jaish-e-Mohammed outfit were killed and three OGWs from Kashmir transporting them in a truck from Dayala Chak to South Kashmir were arrested at Ban Toll Plaza near Nagrota on Jammu-Srinagar National Highway yesterday.