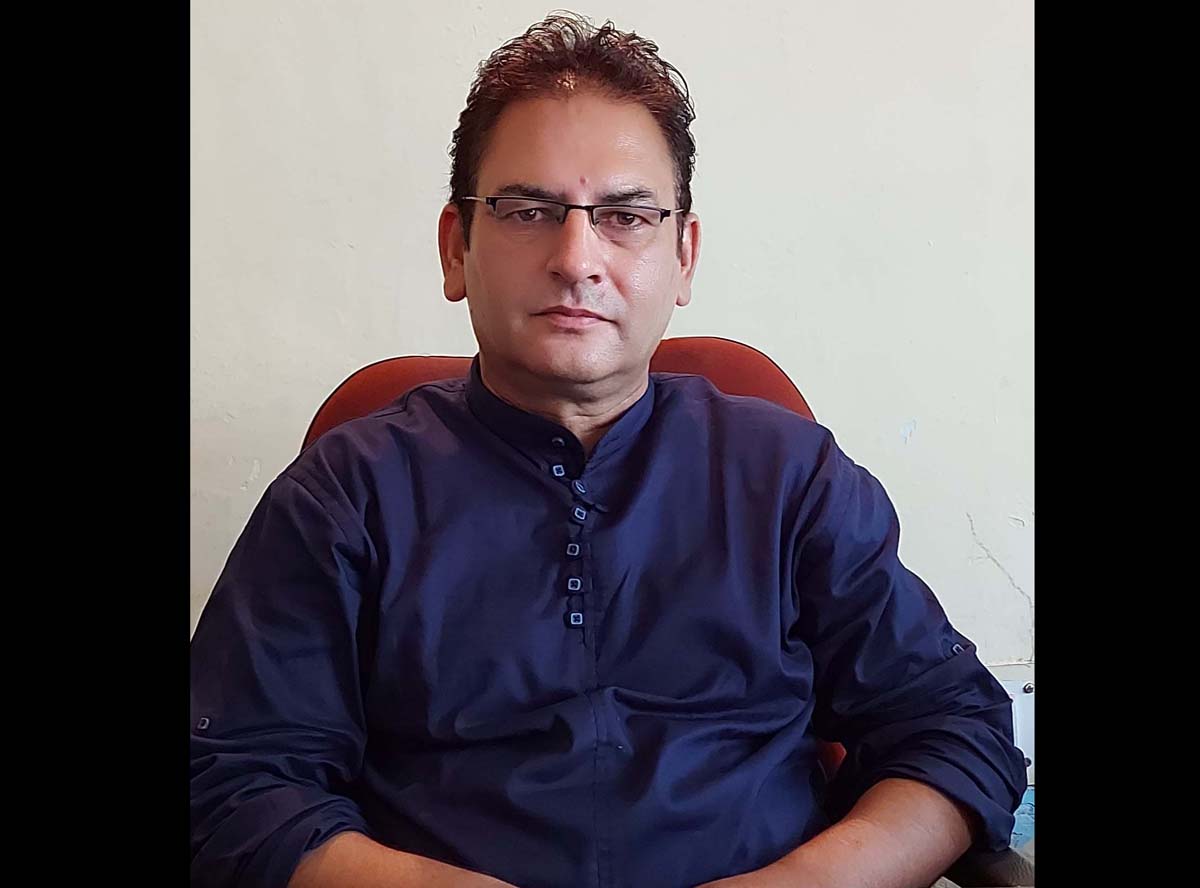 Lalit Gupta
He is not a politician or a religious/community leader, but his life is a constant striving for the due recognition of Gujjar ethnic identity, culture and language viz a viz other dominant identities and cultures in Jammu and Kashmir.
Successfully donning many hats of a Gujjar activist, scholar, linguist, writer, poet, translator, journalist, broadcaster and a social media influencer, Javed Rahi, has emerged as a crusader of the political and socio-economic rights of Gujjars and Bakerwals along with the preservation of their culture and language.
ACTIVISM: Acknowledging Javed Rahi’s infectious missionary commitment for the upliftment of his Gujjar community, culture and language, Prof Lalit Magotra, the president of Dogri Sanstha, once remarked that how he wished that Dogri also had a crusader like him.
Javed Rahi has made his life’s calling to highlight the systemic wrong and injustice being meted out to his community by the erstwhile political dispensations in Jammu and Kashmir. Be it the matter of ensuring reservations guaranteed to Gujjars and Bakerwals as a Scheduled Tribe, their forest rights, issues faced in the times of seasonal migrations, implementation of central laws to protect the nomadic way of life, recognition of Gojari language in the 8th schedule of The Indian constitution, preservation of the rich heritage of Gujjars—Javed Rahi, has been taking up vigorously all such important issues with the politicians, concerned authorities and officers.
OPINION MAKER: During the last two decades, Javed Rahi has truly emerged as an opinion maker: His columns, articles, and statements highlighting topical and critical issues faced the Gujjars, are taken seriously and given prominent display by prominent local as well as national level newspapers. Thus, he is instrumental in creating awareness and galvanizing opinion within general public, government as well as the Gujjar community. As a scholar, he has been regularly presenting research papers and making presentations in seminars, conferences on various socio-political and cultural issues/aspects of Gujjars and Bakerwals and other J&K tribes in local and outside universities and other academic fora.
SOCIAL MEDIA INFLUENCER: A visionary who was quick to appreciate the reach of social media, Javaid Rahi has emerged as a Social Media Influencer among the Gujjar tribe of Jammu and Kashmir and has a large fan following across the world where this community resides. He has gained this popularity on YouTube, Facebook, and Instagram through his @ Javaid Rahi Channel. A known YouTuber, he is the main content creator in Gojri and regularly produces videos on topics like Gujjar origin, history, culture, folklore, socio-economic issues, nomadic way of life, for the video-sharing website YouTube. Recently his @ Javaid Rahi Channel got ‘Silver Creator Award’ which is given by YouTube to such channels that reach or surpass 100,000 subscribers. His channel also boasts of viewership of more than three crore viewers, mainly drawn from India, Pakistan, United Kingdom, Saudi Arabia, United Arab Emirates, United States, Kuwait, Oman, Qatar, Canada and numbers of countries where Gujjars had in the past migrated. Recognizing his popularity among the masses, Union Ministry of Information and Broadcasting Govt of India has asked him to prepare videos as Social Media Influencer to highlight Prime Minister Narendra Modi’s Jan Andolan against Covid-19.
LITERARY & SCHOLARLY CONTRIBUTION: A Doctor of Philosophy (PhD) on ‘Tribal Languages of Jammu and Kashmir”, Javed Rahi, well versed in Persian, Urdu, Punjabi, Dogri and English, firmly believes that language is the soul of a culture. Presently holding the position of the Chief Editor Gojri in J&K Cultural Academy, he has authored about a dozen books and compiled more than 300 books, journals including textbooks, anthologies, published J&K Cultural Academy, J&K State Board of School Education, Gurjardesh Charitable Trust, and Tribal Research and Cultural Foundation, Jammu.
A recipient of National Fellowship from Ministry of Culture, New Delhi, he has received Best Playwright Award from J&K Cultural Academy. His significant compilations are first-ever concise Gojri-monolingual Dictionary, Hindi-Gojri Dictionary linking Gojri with National Language Hindi, and Folk-Lore Dictionary of Gujjar Tribe. He has also headed various prestigious research projects including multi-volume project “Encyclopedia of Himalayan Gujjars’. His other Urdu and English Publications are“Gujjar Shanakhat Ka Safar’, “Jammu Kashmir Ke Qabail Aur Unki Zubanein”, The Gujjar Tribe of Jammu and Kashmir, Gujjar Tarekh O Saqafat.
Born in remote village Chandak of district Poonch, in the family of Khatana Gujjar Bau Noor Mohammad and Rashida Begum, Javed Rahi bestowed with multifaceted and proactive personality has grown in station and stature. He is a prominent name in tribal circles of Jammu and Kashmir.
One who is using his kalam and awaaz to create awareness amongst Gujjars and Bakerwals and even force change in policies for the development of tribal groups, Javed Rahi has emerged as a role model for others marginalized groups in the Jammu and Kashmir to emulate and stand up for their rights and aspirations.