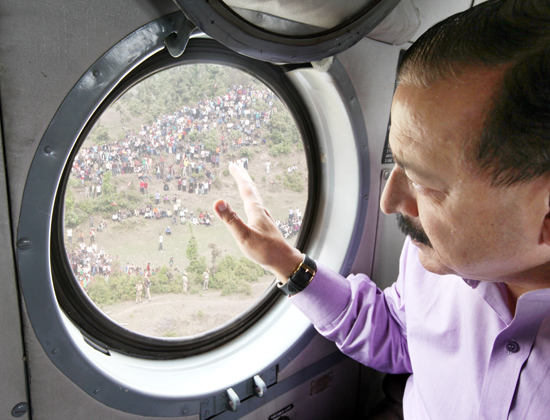 Avtar Bhat
BILLAWAR, Apr 8: Maintaining that not only Kashmir but Pak occupied Kashmir (PoK) is also an integral part of India, Union Minister of State in PMO with independent charge of North Eastern States, Dr Jitendra Singh today said that liberation of PoK from clutches of Pakistan is unfinished task of India. The Union Minister also rejected the proposal of so called autonomy for the State being an only solution to present crisis.
Talking to reporters on the sidelines of a Party meeting here, today, Dr Jitendra Singh said that India stands by joint Parliament resolution of 1994 to liberate PoK which is under the forcible occupation of Pakistan from its clutches.
Dr Jitendra Singh said not only Kashmir but entire J&K, which was ruled by Maharaja Hari Singh up to 1947, is part of India. “If there is any dispute with neighboring country that is on PoK, the liberation of which is our unfinished task”, he added.
Without naming NC patriarch, Dr Farooq Abdullah who while addressing a public rally at Mandi, Poonch yesterday had said that India returned Haji Peer and Chhamb and won’t be able to take PoK, Dr Jitendra Singh questioned “is it in keeping the propriety of a MP to issue statements against the unanimous resolution of Parliament, which was passed in 1994 when Congress party led by P V Narsimha Rao was ruling the country? Is this position taken by an MP particularly when his party is part of Congress led UPA even today?, he asked.
On autonomy demand of Dr Farooq Abdullah, the Union Minister said the clock can’t be reversed. “The resolution passed by NC Government during its rule in 1996 in the State was summarily rejected by then Vajpayee Government at Centre and inspite of that the NC continued to be part of the NDA at that time”, he added.
The Union Minister also blamed Congress, NC and Panthers Party for Rohingyas issue and said that they (Rohingyas) came here when these parties were in power and over these years they never talked about deporting them. But it was only BJP and its sister organizations which always remained on forefront and came on roads over these years demanding their deportation, he added.
Dr Jitendra Singh questioned that how these refugees came here when under Article 370 no outsider can settle in the State and asked “are not these parties accountable for their omissions and commissions in this regard”? “They maintained a stoic silence over a decade on the issue and now they have started crying in desperation after losing the power”, he added.
He said Rohingyas is not the issue confined to J&K only but it is a national problem as West Bengal has also been afflicted by this problem.  But the Union Home Ministry has taken the cognizance of the same and it is collecting data about them, he added.
Later addressing a party meeting here, Dr Jitendra Singh held the previous Congress- NC responsible for delaying the construction of much talked about Ujh Multipurpose project. “The previous Governments deliberately neglected the Ujh as well as Shahpur Kandi projects as they had other priorities for themselves”, he said.
Dr Jitendra Singh said that a demand was made that Government of India should revoke Indus Water Treaty and stop flowing of water of three major rivers of J&K to Pakistan. “At that time I took up the issue with Prime Minister, Narendra Modi that instead of stopping water to Pakistan we are unable to utilize the water of those rivers which we are supposed to do and cited the example of Ravi river flowing through riparian States of Punjab and J&K in this regard.”.
“I informed PM that entire water of river Ravi is flowing to Pakistan through Madhopur due to failure of constructing Shahpur Kandi Project”, he said, adding this project was abandoned due to personal ego of the past Governments. To the delight of the gathering, he announced that Ujh Multipurpose Project will also be taken up in hand soon saying that with the construction of these two projects Kandi will no longer remain Kandi as they are the game changing projects for the twin districts of Kathua and Samba.
Lambasting Congress, he accused it of cancelling the issuance of Dogra certificates on the basis of which the people of Jammu region were getting priority in recruitment in Army which was a precedence from British rule.
Dr Jitendra Singh also highlighted the various projects taken up in hand in the Kathua -Doda Constituency during last four years and said that the Modi Government is committed to the welfare of the people living in remote and far off areas of the State.
He strongly favoured the demand of the people that Jammu University’s Extension Campus be established at Billawar saying that the area is an educational hub and it has created many intellectuals and top most educationists.
He assured the people that the other genuine demands will also be settled and issued instructions to DC Kathua, Rohit Khajuria to convene the meeting with prominent people of the area to look into their issues.
The local BJP leaders including Narayan Dutt Tripathi, Amrik Singh and others also spoke and highlighted various demands including the construction of a local tunnel in the area to shorten distance between Bani, Basholi and Billawar.
Dr Jitendra Singh also visited Budo, Billawar and announced funds from MPLAD for Stadium in the area.
His chopper, however, could not land in Machedi area of Bani tehsil as space of runway for landing of the chopper was not proper though a large number of people had gathered there to listen him at the public rally. However, he announced Rs 10 lakh from MPLAD for the area. Earlier, the MP had sanctioned Rs 50 lakh for the constituency.  Dr Singh waived the masses from the plane who were eagerly waiting there to hear him and also conveyed his message to local MLA Jeevan Lal through phone.