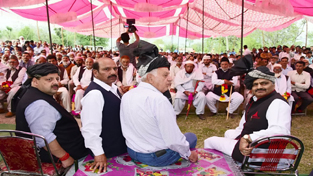 Excelsior Correspondent
JAMMU, Apr 8: Former Chief Minister and National Conference president Dr Farooq Abdullah said today that Jammu and Kashmir will remain one entity and no power can separate Jammu as was being propagated by some organizations. He also opposed the demand for Central Bureau of Investigations (CBI) probe into Rassana rape-cum-murder case of minor girl in Hiranagar tehsil of Kathua district saying the CBI was not better from Jammu and Kashmir Police.
Addressing a public meeting at Balakote in Mendhar tehsil of Poonch district, Dr Abdullah said some organizations have been calling for making Jammu a separate State and declared that Jammu didn’t “belong to their father” that they can take it away from the State.
“Jammu, Kashmir and Ladakh are parts of one State and will remain so,” he declared.
Taking exception to people taking out march in favour of rape-cum-murder accused of Rassana, Hiranagar, carrying tricolor, Farooq rejected their demand for CBI probe into the case asking whether the CBI was a better organization than Jammu and Kashmir Police.
He said the people should understand that a minor girl has been raped and murdered and shouldn’t try to shield the accused.

Click here to Watch Video
Farooq said Jammu and Kashmir is part of India and they have never said that they were part of Pakistan.
“We only ask for our rights, which have been snatched,” he said referring to autonomy. He demanded restoration of autonomy to the State.
Farooq said India and Pakistan should initiate the dialogue process with an active involvement of the people of Jammu and Kashmir to usher harmony and tranquility in the State.
He cautioned the Centre against taking the people of J&K “for granted and ignoring” their legitimate aspirations. He said the claims that demonetization had curbed stone pelting had fallen flat and expressed concern that “youth were now taking to guns”.
India and Pakistan should resume the dialogue process and engage people of Jammu and Kashmir in an acceptable solution, Abdullah said.
Sagacity lies in acknowledging realities and shedding the baggage of the past, he said.
Referring to the Indo-Pak hostilities in 1990s, he said former Prime Minister Atal Behari Vajpayee had invited the then Pakistan President Parvez Musharraf despite the Kargil incursion and his political wisdom worked in terms of a cease-fire agreement which brought cheer to the lives of border people.
“Why can’t Vajpayee’s spirit be emulated by his political inheritors,” he said warning that extreme positions could lead to devastation and destruction in the entire region.
Reiterating his party’s demand for greater autonomy to the State, the former Chief Minister said internal autonomy within the framework of Indian Constitution and conversion of Line of Control (LoC) into Line of Peace was the pragmatic way forward.
“The people of the State decided their future in 1947 by acceding to Mahatma Gandhi’s secular India and they will fight all machinations of reversing these well established credentials by polarizing forces. India is not religion specific but a country of all, irrespective of religion, region and caste. This legacy cannot be trampled on by fringe elements, currently holding the centre-stage in Indian politics, as majority of Hindus disapprove politics of polarization and division,” he said.
Without naming BJP, he said the current spell of governance in New Delhi had created chaos all over, with people feeling their identities threatened and thus taking to streets.
Abdullah expressed concern over the “dicey political situation” saying he would keep his fingers crossed about things to happen in case the present arrangement is repeated in New Delhi in 2019.
“India cannot flourish with a myopic political vision. It has been a forward looking country, which has to move forward as a strong, stable and a united nation,” he added.
Abdullah cautioned people against the divisive politics, saying attempts were being made to create wedge in the society on the basis of region and religion.  “All this is being done with a sinister motive of fragmenting Jammu and Kashmir into three different regions”, he said and warned those nurturing this “nightmarish dream”.
National Conference would fight these designs tooth and nail, he said.
Abdullah cautioned the Centre against taking the people of Jammu and Kashmir for granted.
“The claims that demonetization had put an end to stone pelting in Jammu and Kashmir have fallen flat as the youth were now taking to guns. The situation therefore cannot be allowed to drift anymore,” he said.
The former Chief Minister called for earnest initiatives to reach out to the people and urged the Centre to resolve the issues which are essentially political in nature and try to win over the alienated hearts and minds by shunning the policy of “creating divisions”.
In his address, NC general secretary, Ali Mohammad Sagar called upon the cadre to be prepared for meeting challenged faced by the State and declared that the NC will stand like a rock against those trampling its glorious ethos.
NC provincial president Devender Singh Rana, while addressing the gathering, cautioned against the machinations of communal forces and said that the people will unitedly foil the politics of hate.