E-Paper
Home National Not affected by criticism of opponents, focused on task ahead: Sunny... 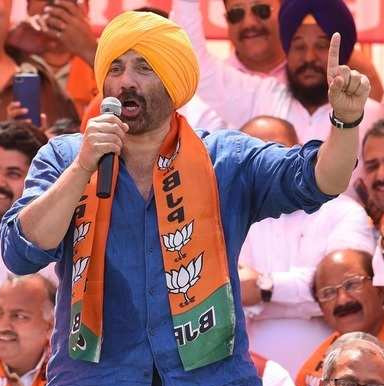 GURDASPUR (Pb), May 7:
Bollywood actor and BJP’s Lok Sabha candidate, Sunny Deol says he is focused on the task ahead and is not affected by his opponents dubbing him an “outsider”.
The BJP has pitted the 62-year-old actor against sitting MP and Punjab Congress president Sunil Jakhar from Gurdaspur.
“People keep asking me this question (on rivals dubbing him an outsider) and I say, I am not here to reply to what all is being said.
“I have come here to work and serve the people, I have come here to do my job.My job is to understand my people, my constituency,” Deol said during his campaign trail here.
The son of veteran actor and former MP Dharmendra, Deol has been accused by the opposition of having no understanding about Punjab, and has been termed an “outsider” and a “parachute” candidate.
Waving at crowds from the sunroof of a Range Rover or from atop a mini-truck, Deol has been attracting a large number of people at his roadshows. He is being accompanied by leaders of the BJP and its ally Shiromani Akali Dal (SAD).
He said, if elected, he will never let the people down, and “never betray their trust”.
“The love they have shown towards me is just overwhelming. I am that kind of person who likes to take peoples’ sorrows and make them happy, this is my nature,” said Deol, who is famous for his hit films like ‘Border’, ‘Gadar: Ek Prem Katha’, ‘Ghayal’ and ‘Damini’.
“I am a newcomer, but I am ‘Ziddi’ (stubborn) and I will go on to achieve what I set out for,” said the actor.’Ziddi’ was one of his popular movies.
“I speak dialogues in films when I play a character in films, that is what I have been doing. In real life, I am what every person should be, which is truthful, hardworking and sincere in what one is doing. Rest, it is up to ‘Waheguru’,” Deol said.
Congress candidate Jakhar has accused Deol of having no understating of Punjab’s issues and asked him to share his vision for the Gurdaspur constituency, telling him that “politics is a serious business and not a time pass activity”.
“I am from Punjab and belong here,” Deol said, adding that opponents may keep saying what they feel like but that does not affect him.
There are many issues in Gurdaspur, mostly related to farmers and youth, he said and assured “I will look for solutions to these issues.”
When asked why he chose the BJP, Deol said: “I chose this party because I like Narendra Modi quite a lot, he has taken the nation forward during the past five years, our country has progressed.”
“India’s global prestige has increased under this government. We need a strong leader,” he said. “My father had connected with (the then prime minister, late Atal Bihari) Vajpayee ji and now, I got an opportunity to connect with Modi ji,” Deol said.
The 13 Lok Sabha seats in Punjab, including Gurdaspur, will go to polls in the seventh and final phase of polling on May 19.
Jakhar won the seat in the 2017 bypoll, which was necessitated after the death of actor-turned-politician Vinod Khanna of the BJP in April that year. (PTI)