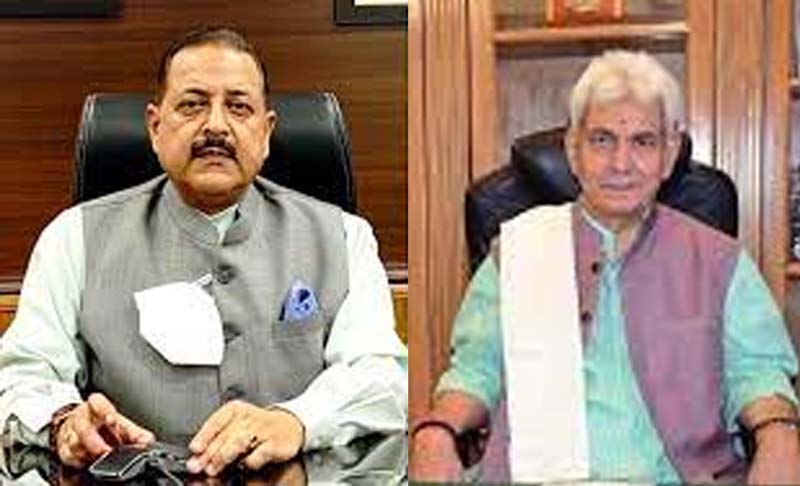 JAMMU, May 27: North India’s first Industrial Biotech Park constructed at Ghatti near Kathua will be dedicated to public tomorrow. It will be inaugurated by Union Minister of State in PMO with Independent charge of Science and Technology, Dr Jitendra Singh and Lt Governor Manoj Sinha.
Constructed at an estimated cost of about Rs 150 crore, the Biotech Park was got approved by Dr Jitendra Singh who is also MP of Kathua -Udhampur-Doda Parliamentary constituency in 2014 which was one of his priority projects for the development of J&K. However, it took some years in land transfer and the work on the park started in the year 2019.
The building of the Biotech Park has been constructed on 16000 square metres of land and it will generate resource for 50 StartUps and 500 entrepreneurs.
Dr Jitendra Singh told Excelsior that during the year 2014 two Biotech parks were sanctioned for the erstwhile State of J&K including one for Kathua in Jammu region and another in Handwara area of Kashmir valley.
He said the facilities like herbal extraction, fermentation, analytical lab, distillation, micro-propagation, plant tissue culture would be available in Biotech Park, Ghatti Kathua besides, the provision of technology incubation, training and skill development. This Biotech Park would be a robust platform which would support the agri-entrepreneurs, Start Ups, progressive farmers, young entrepreneurs, scientists, scholars and students not only from Jammu & Kashmir and Ladakh but also from nearby States of Punjab, Haryana and Himachal Pradesh, the Minister added.
He said the Biotech Park would act as hub for incubation of new ideas the StartUps have and would also facilitate to connect with the outside Industrial Houses.
Dr Jitendra Singh said realizing potential of the region for attracting investments in biotechnology related industries, department of Biotechnology, Government of India and JK Science, Technology & Innovation Council have jointly conceptualized the project of establishment of two Industrial Biotech Parks, one in Jammu division and other in Kashmir region.
The Minister said the Biotech Parks of both Jammu and Kashmir were jointly funded by Department of Biotechnology, Government of India, Ministry of Science & Technology and Jammu & Kashmir Science, Technology & Innovation Council. The CSIR-Indian Institute of Integrative Medicine, (CSIR-IIIM) Jammu was entrusted the responsibility of implementation of this project.
The Biotech Parks of J&K are among nine Biotechnology Parks supported by Department of Biotechnology in various States, sources said. Besides, promoting research it will also provide employment to people and help in increasing farmers income, he added.
The Minister said while Gatti Biotech Park will carry out research on biodiversity, medicinal and aromatic plants of Jammu and Kashmir and Ladakh, it will also promote green category businesses. From the Kandi areas of Jammu division to Bhaderwah, Bani, Basohli and Kishtwar, the climatic yields of medicinal plants will be increased and farmers will get better income apart from traditional farming. Work has already been started by IIIM, Jammu to promote the entrepreneurial idea.
He said the Government of India through Department of Biotechnology, Ministry of Science and Technology, has taken a number of initiatives to accelerate the growth of biotechnology by promoting development of innovative technologies, infrastructure, human resources and industry, which has helped the sector to gain global visibility.
The erstwhile State of Jammu & Kashmir, now Union Territories of Jammu & Kashmir and Ladakh, are uniquely positioned to harness the potential of biotechnology due to the conducive climate, geographic location and availability of unique crops and plants in the region which can be harnessed through biotechnology for production of value-added products and processes, sources said. The region is bestowed with plenty of natural resources which are of great economic value, particularly wide range of elite varieties of flowers, commercially relevant medicinal plants etc. Cultivation of fruits and nuts are also important sources of income for the region, he added.
Dr Jitendra Singh said the Department of Biotechnology has established Biotechnology Parks/Incubators across the country to translate research into products and services by providing necessary infrastructure support. These Biotechnology Parks offer facilities to Scientists, and Small and Medium sized Enterprises (SMEs) for technology incubation, technology demonstration and pilot plant studies for accelerated commercial development of Biotechnology. He said the Indian biotechnology industry is one of the fastest growing knowledge based economies and is expected to play a vital role in shaping India’s economy. India is uniquely positioned to harness the immense potential that biotechnology offers for transforming all aspects of life globally. The Indian biotech industry is among the top 12 destinations in the world and ranks second in Asia after China.
Dr. Zabeer Ahmed, senior Principal Scientist CISR-IIIM and OSD Biotech Park Ghatti, Kathua informed that India’s top Scientists and Technologists, Prof. Ajay Kumar Sood, Principal Scientific Advisor to Govt. of India, Dr. Rajesh Gokhale, Secretary, Department of Biotechnology and Department of Scientific and Industrial Research and Director General, CSIR, Dr. M. Ravichandran, Secretary, MoES, Dr. S. Chandersekhar, Secretary, Department of Science & Technology, Vice Chancellors of Universities of Jammu & Kashmir UT, Directors of IIT, AIIMS & IIM, Industrialists, Agri-enterprenuers, Start Ups, Scholars and students would be attending this inaugural event.