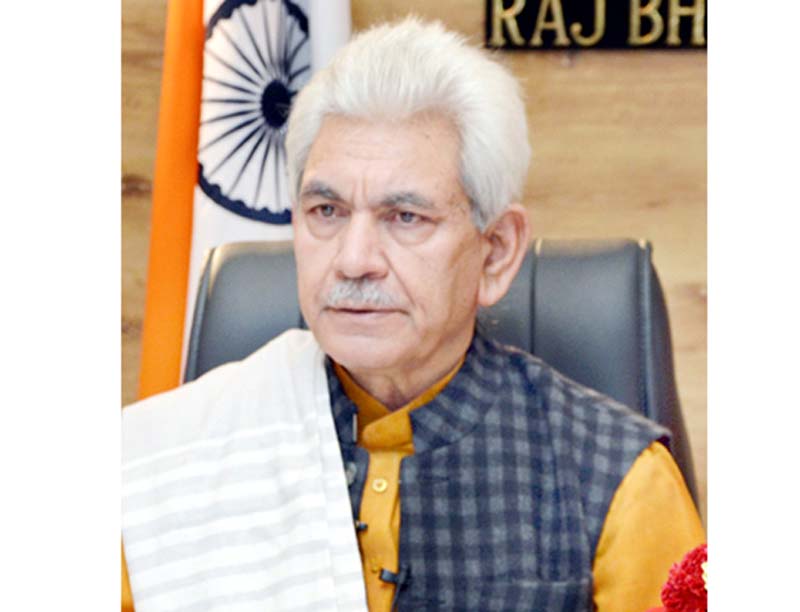 JAMMU, May 27: Lieutenant Governor Manoj Sinha today declared that some incidents won’t derail peace process in Jammu and Kashmir and asserted that there was “deep conspiracy” behind targeted killings as some forces here as well as across the border are fixing targets.
In an interview to a national news channel, Sinha said some incidents (of killings) notwithstanding, security forces including Jammu and Kashmir Police have been doing very good job and they have killed large number of militants including foreigners.
“But some forces here as well as across the border are fixing targets. They are running the ecosystem. But, Central and Jammu and Kashmir Governments are hitting at the ecosystem of finances, recce, logistics, ideology etc,” Sinha said, adding the security agencies are working at it and all those involved in ecosystem will be identified and taken to task.
“I’m proud of Jammu and Kashmir Police and all security forces who are working day and night to finish terrorism,” he said.
He added that an attempt is being made to project “wrong picture” of Jammu and Kashmir but declared that the attempts will fail and peace will lead to prosperity.
Asserting that prime concern of the Government is protection of the people, the Lieutenant Governor said terrorism has no religion and anyone who works against sovereignty of the country will be removed from the Government services.
“Many Government officers, teachers etc have already been removed from the services and action will be taken against others based on reports of the Intelligence agencies,” Sinha said.
He reiterated that present Governments at Centre as well as Jammu and Kashmir don’t believe in buying peace but establishing peace.
On initiation of political process in Jammu and Kashmir, the Lieutenant Governor reiterated the statement of Union Home Minister Amit Shah made in Parliament that delimitation of constituencies will be followed by Assembly polls and grant of Statehood.
On date for Assembly elections, Sinha said the Election Commission of India has to take a call on that. He added that elections will definitely be held in Jammu and Kashmir.
“Peace and prosperity only will lead to development of Jammu and Kashmir,” he added.
Referring to a statement by a senior Congress leader that tourism boom in Kashmir was due to summer in the Valley and not because there was normalcy, the Lieutenant Governor said even during winters, all record of tourist arrival were broken.
“There is no space in the flights. Such is rush of the tourists,” he said.
Maintaining that all issues pertaining to Kashmiri Pandits are being resolved on priority by Jammu and Kashmir administration, Sinha denied having received any resignation from the migrant employees after the killing of Rahul Bhat by the militants.
“Neither me nor anyone in the administration has received any such resignation,” he said and referred to the Government decision to post Kashmiri migrant employees recruited under the Prime Minister’s package at district and tehsil headquarters with full security so that they feel safe.
He added that this process has been expedited.
“Some forces don’t want rehabilitation of Kashmiri migrants in the Valley. The migrants shouldn’t fall in their trap,” he asserted.
Sinha also listed achievements of Jammu and Kashmir Government including no pending bills of contractors and suppliers on 31st March, clearance of all dues of pensions/Provident Fund etc, execution of 11,000 projects under Capex, ongoing work on Rs one lakh crore worth National Highways and tunnel projects, doubling of farmers’ income and maintaining complete transparency in the working of the Government.