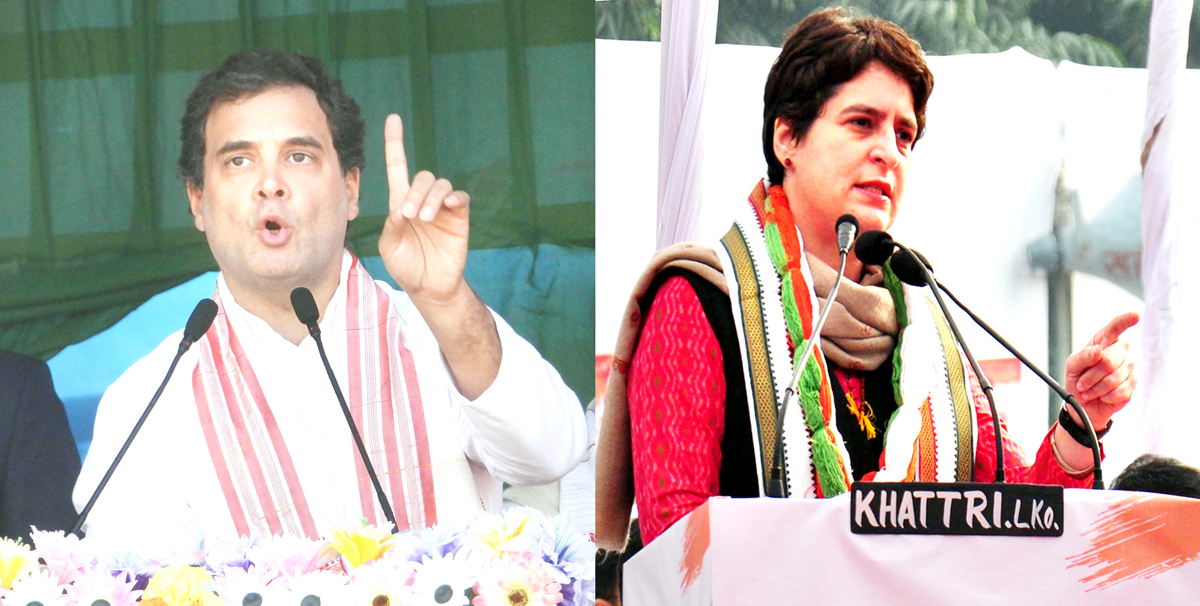 AMETHI (UP), Feb 25:
Congress leaders Rahul Gandhi and Priyanka Gandhi Vadra on Friday blamed successive governments of rival parties in Uttar Pradesh for its economic backwardness, forcing people to migrate to other states as labourers.
Taking a swipe at Prime Minister Narendra Modi, Rahul Gandhi said he has been working only for the billionaires, who do not give employment.
Coming together for a joint rally in Amethi, which has long been the pocket borough of the party till Rahul Gandhi lost it to Smriti Irani in the 2019 Lok Sabha election, the Congress leaders asked people to vote for their own good and children, and not on emotional issues of caste and religion.
“Uttar Pradesh doesn’t lack anything and it can leave all other states behind. You go to Punjab, Maharashtra and other states to work as labourers in search of livelihood. Why can’t you get it here,” Rahul Gandhi asked.
“It’s because for years you elected the Samajwadi Party, BJP and the BSP. All these made wrong promises one after the other and stole money from you,” he added, apparently responding to allegation by the rivals, who have been blaming the Congress for people’s migration.
Accusing PM Modi of helping only big industrialists, he said the billionaires do not give employment.
“It is small and medium traders and farmers who generate employment and this section, which is the backbone of job givers, has been broken,” he said, adding that in these circumstances there will no be jobs for the youth, even for those with proper education.
Saying that the PM Modi had promised two crore jobs to the youth, he asked, “Why is he not speaking about it in electioneering this time?”
People are well aware of his “lies” now, said the former Congress president attacking PM Modi.
Priyanka Gandhi Vadra said the voters will have to make up their mind whether they want politics of development or the one that entangles them in a “fake web of religion and caste”.
Referring to her visit to a locality in Lucknow recently, the Congress leader said she there met some children, who were qualified but unemployed.
“Have you brought up your children so that they do not have any future and that they continue to get a sack of foodgrain and remain dependent on it. This is a conspiracy of these political parties to keep you poor, keep your stomachs empty so that your emotions could be exploited by them,” the Congress leader alleged.
This is the government of the rich and there is no hearing of the poor, she alleged.
“When there is harassment, neither Akhilesh Yadav nor Mayawati come out of their homes, leave alone Yogi and Modi. They make the father of an accused stand with them on the dais,” she said referring to the Lakhimpur Kheri violence.
“Their minister’s son killed farmers. Change these circumstances,” she said, stressing that people should tell parties either to work for development or leave.
Eight people, including four farmers, were killed in the violence last October. The farmers were mowed down by cars allegedly carrying by BJP workers. Union minister Ajay Mishra’s son Ashish was arrested in the case. (PTI)
The Congress leaders also spoke about the development and infrastructure building that took place in Amethi during the Congress-led UPA government in the past.
The joint rally by the brother-sister duo came a day after Prime Minister Narendra Modi held a rally here in the presence of Union minister and Amethi MP Smriti Irani.
Five Assembly seats in the Amethi Lok Sabha constituency will go to vote in the fifth phase of the UP Assembly polls on February 27.
The Congress was wiped out in the 2017 state polls in Amethi, which was considered the Gandhi family bastion. (PTI)