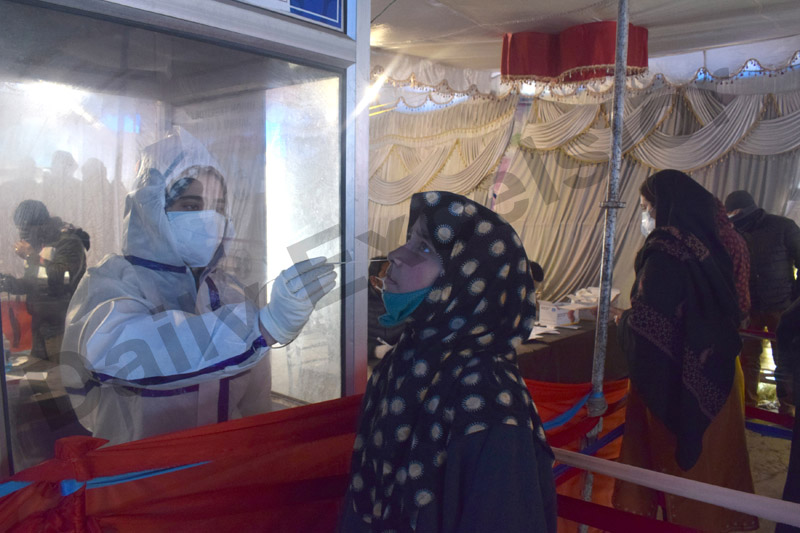 Irfan Tramboo
Srinagar, June 24: As Jammu and Kashmir is witnessing a slight increase in the COVID-19 cases, the concerned authorities are yet to ramp up the pace of testing especially in Kashmir while there has been no headway in setting up Genome Sequencing Labs (GSLs) in the Union Territory.
As per officials, currently, per day nearly 4000-5000 COVID-19 tests are being carried out in one day while the same number was nearly 45000 tests per day alone in Kashmir when the COVID-19 was at its peak.
However, they said that they are awaiting the latest guidelines from the Ministry of Health before they could ramp up the testing and pass on the necessary directions to the concerned officials in the districts as there has been a slight increase in the COVID-19 cases in J&K.
“The testing has not been ramped up yet as even at present we are carrying out 4000-5000 tests per day, which even goes above 5000 per day; in next few days, there is every likelihood that the testing across J&K will be ramped up,” the officials said.
It is to be noted that nearly 10000 COVID-19 cases are being carried out in J&K despite a slight spike in the cases for the last few days while various States of the country are witnessing a daily rise in the positive cases. The officials said that on June 23, 9905 COVID-19 tests were carried out across J&K out of which a total of 38 cases were found positive, 23 from Jammu Division and 13 from Kashmir Division.
Experts said that the new variants of the COVID-19 infection are likely to trigger another wave of the pandemic and that there is a need not only to ramp up the testing but also to do more genome sequencing which is possible only when more testing is conducted.
On the other hand, while the Government had earlier planned to set up two genome sequencing labs, one in Srinagar and one in Jammu, as of now, the matter seems to have been side-lined, particularly after the COVID-19 situation subsided in J&K.
Officials said that there was a considerable development made in his regard earlier. However, there has not been any headway in this direction for the last sometime now.
“It was planned earlier, rather a lot of work was done in this regard, particularly when the last wave of COVID-19 hit J&K and there was an increase in the positive cases,” officials said
They also said that GMC, Srinagar and Jammu were identified where the genome sequencing labs would be started. However, as per officials, after the COVID-19 situation subsided in J&K, “the matter took a back seat and as of now there is no development on the same while as the latest status of the process of setting up the labs is not known.”