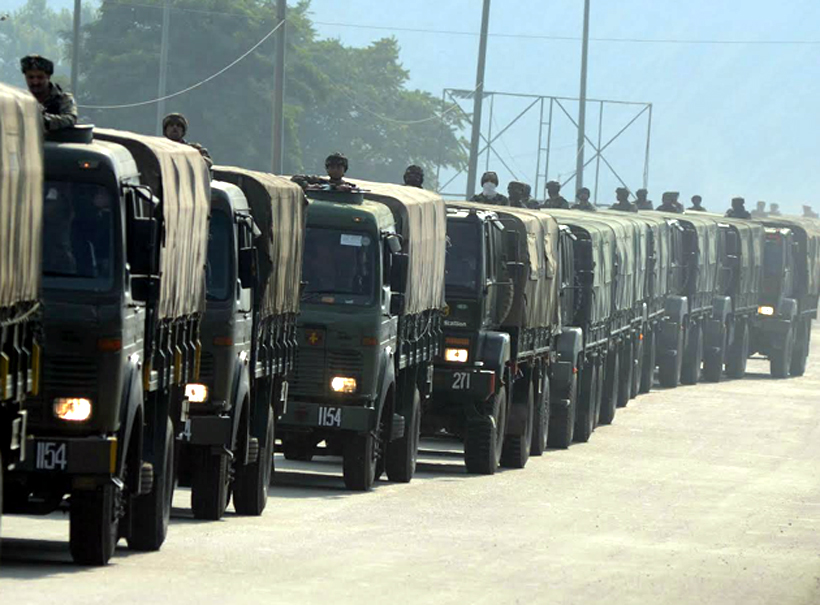 Fayaz Bukhari
Srinagar, Feb 16: Army and Central Reserve Police Force (CRPF) today implemented the decision to allow no movement of civilian traffic during convoys leading to huge traffic jams on the highway.
Union Home Minister Rajnath Singh yesterday said in Srinagar that there would be no movement of civilian traffic on the highway and this morning it was implemented on the ground for the first time which led to huge traffic jams at several places.
The convoy this morning moved towards Srinagar and reached Wanpoh in Anantnag at around 11 a.m. The commuters who were travelling said that they had to wait for two hours before they were allowed to move. A driver, Shoukat Ahmad, said that he was stopped by the army along with others at Wanpoo 40 minutes before the convoy was to move from the area and we were allowed to move half an hour later after the convoy passed. “This led to huge traffic jams and it took us almost two hours”, he said.
The traffic was stopped at all the intersection of the highway at the convoy time that led to chaos on highway and the adjacent roads.
Later in the evening, meeting of the top security officials including Director General of the CRPF Rajeev Rai Bhatnagar, Inspector General of Police, S P Pani, IGP Traffic Alok Kumar, Army Sector Commander and other security force officers was held in Anantnag on the issue of convoy movement.
The issue of the convoy movement was discussed by the CRPF and the Army with the local police during which sources said the IG Kashmir told them that it will lead to chaos on the highway and traffic jams. He suggested that the security on the highway will be strengthened for the security of the convoys.
And in the meantime, the trade bodies in Kashmir called for Kashmir bandh on Sunday to exhibit solidarity with the people of Valley currently staying in Jammu or elsewhere and are being harassed.
The trade bodies including both the factions of Kashmir Traders Manufacturing Federation (KTMF) headed by Muhammad Yasin Khan and Bashir Ahmad Rather, Kashmir Chamber of Commerce and Industries (KCC&I) headed by Sheikh Ashiq and Traders Association Lal Chowk and others called for a complete shutdown on Sunday.
The shopkeepers in Lal Chowk area of Srinagar also observed complete shutdown from 3:00 pm today in solidarity with Kashmiris staying outside the Valley.
The shops were closed this afternoon after the Federation announced call for a shutdown across Kashmir till Sunday evening.
The traders also assembled near Ganta Ghar here amid sloganeering in favour of Kashmiris outside the Valley, demanding authorities to take steps to ensure safety of people of Kashmir outside.
“We are protesting here to express concern over the growing attacks on Kashmiris including students, employees and common persons in Jammu and other places. This protest is aimed to exhibit solidarity with them,” protesting traders said.
They added that Governor led administration must take steps to ensure safety of Kashmiris. “We want administration to ensure that no Kashmiri be harmed in any part of India,” they said.
Following the protest, clashes erupted in Maisuma and adjacent areas during which forces used teargas canisters to disperse the agitating youth. The clashes also broke out at Nowhetta but the security forces chased the protesters away.