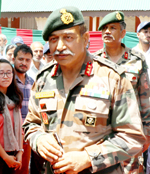 Excelsior Correspondent
SRINAGAR, June 12: General Officer Commanding (GOC) of the Srinagar-based Chinar Corps, Lieutenant General A K Bhatt today said there is no indication of militant recruitments during suspension of the security operations against militants.
The GOC, when asked during a function at Srinagar about any increase in militant recruitment since the suspension of the security operations against militants was announced by the Centre at the beginning of the holy month of Ramzan, told Excelsior that there are no indications as such at the moment and “we hope it will come down”.
“Since the ceasefire, some peace has been achieved and the public has responded well to it. We will be happy if there is no civilian casualty in these 30 days of Ramzan,” he said.
Lt Gen Bhatt said there has been some calmness among the public after the ceasefire and they have responded it well. “That is why we are happy if there will be no casualty in the month of Ramdhan”, he added.
Click here to watch video
The GoC said any decision regarding extension of ceasefire will have to be taken by the Government but the Army was ready to implement any such decision. “That decision has to be taken by the Government and we are ready to implement any such decision,” he said.
About the infiltration attempts from across the LoC, the Corps Commander said there were attempts by Pakistan, but the troops were deployed to stop them. “Pakistan is still doing its best in the infiltration but our troops are all set and deployed there to stop the infiltration”, he said.
On weapons snatching incidents in the Valley which are on increase, the GOC said it is frustration of the militants. “This is just their frustration but police has foiled various attempts of weapon snatching at various places last month and police is now effectively responding against these incidents”, he said.
Earlier, Lt Gen Bhatt inaugurated the Army’s Kashmir Super 30 (Medical) free residential coaching for NEET aspirants. “It is a proud moment and a happy moment for us that we have selected 30 students from across the J-K for the Super 30 (Medical). I am sure these students will get good coaching and secure admission in best colleges across the country and earn a name for themselves, for their parents and for the country,” he said.
Lt Gen Bhatt said the endeavour of the forces is to join the youth of the Valley with the mainstream. “I am sure these students, who are our future, will make full use of the opportunity to move forward in life… It has been our main aim, especially since the last one year, to engage youth. The aim behind all our activities is to join the youth with the mainstream,” he said.