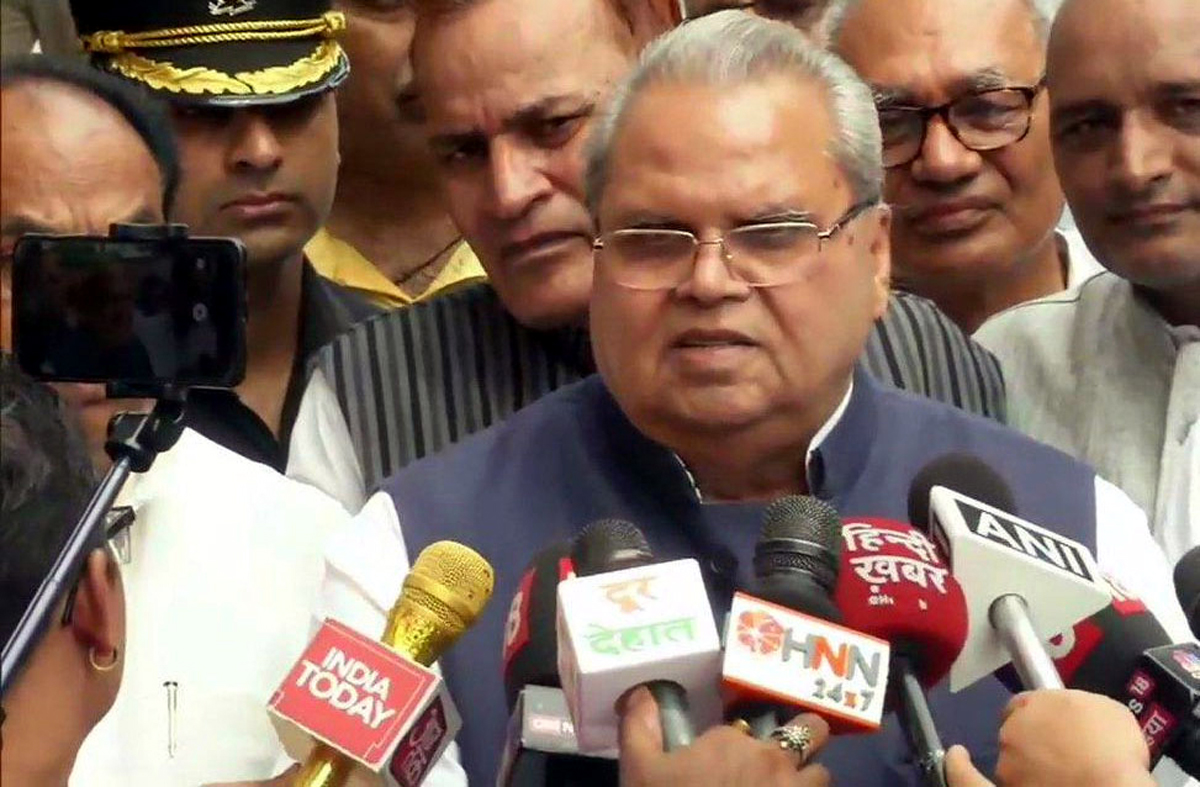 ‘No life lost in past 20 days’
No shortage of medicines, essentials
Excelsior Correspondent
JAMMU, Aug 25: Governor Satya Pal Malik said today that no life has been lost during last 20 days after abrogation of special Constitutional provisions of Jammu and Kashmir and maintained that if blockade of communication helps save lives, there was no harm in it.
Speaking to reporters in the Union capital where he had gone to pay his last respects to former Union Finance Minister and Bharatiya Janata Party (BJP) stalwart Arun Jaitley, Malik said whenever there was a crisis in Kashmir in the past, 50 people used to be killed in the first week itself.
Click here to watch video
“No life has been lost in Jammu and Kashmir due to any violence during last 20 days,” Malik said.
It may be mentioned here that restrictions were imposed in Jammu and Kashmir on August 5 following revocation of Article 370 of the Constitution of India granting special status to the State and bifurcation of the State into two Union Territories of J&K and Ladakh.
“We are clear that there should be lo loss of human life,” the Governor asserted.
“10 Din Telephones Nahi Honge, Nahi Honge, Lekin Hum Bahut Jaldi Sab Wapas Kar Denge (If there are no telephone connections for 10 days, so be it. But we will restore everything soon),” he said, adding that there was no harm in blockade of communication if it helps save lives.
Malik said that in the past, whenever there was a crisis in Kashmir, at least 50 people used to die in the first week itself. However, he added, they have made it an attitude that there should be no loss of human life.
Malik denied any shortage of medicines and essential commodities in Kashmir.
“There was no shortage of medicines and essential commodities anywhere in Jammu and Kashmir and enough stocks were available for people to buy. In fact, we delivered meat, vegetables and eggs to people’s doorsteps on Eid,” he said.
In a statement, the State administration said 1,165 out of 1,666 chemist shops in Srinagar remained open on Sunday.
The Kashmir Valley has 7,630 retail chemist shops and 4,331 wholesale shops, it said, adding that around 65 per cent shops remained open there.
Medicines worth Rs 23.81 crore have reached in retail shops in the last 20 days.
“That’s slightly higher than the monthly average,” the statement said.
It said all 376 notified drugs are available at Government shops and also private retailers. Sixty-two essential/life saving drugs were also available. “Both categories have 15-20 days stock,” it added.
The average delivery time from placement of order is 14-18 hours from Jammu, as most of the distributors are from there, the statement said.
Noting that there was some shortage of baby food in the Valley for nearly two days, it said fresh stocks have been received and they are sufficient for the next three weeks.
“No cases of overpricing were received in 72 test check cases,” it added.
Fondly remembering Jaitley, Malik said it was the departed leader who had insisted him to take up the responsibility as the Jammu and Kashmir Governor last year.
“I was advised by Arun Jaitley to take up the responsibility as Governor. He told me that it will be historic. He also told me that his in-laws are from Jammu,” he said.
Malik paid tributes to Jaitley at BJP office in New Delhi today.
The Governor described Jaitley as a valued friend whom he had the honour of knowing since 1974. Jaitley was admired by people across all sections of society through his dedication and honesty, he said.
Malik said Jaitley was a multifaceted personality and a great statesman having a knowledge of wide field including Law, Finance and Sports.
“Besides this, he had a lot of contribution to the Government including the GST for which he would be remembered for decades,” Malik said, adding that Jaitley’s demise was a great loss to the nation and to him personally.
The Governor prayed for peace to the departed soul and strength to the family in this hour of grief.