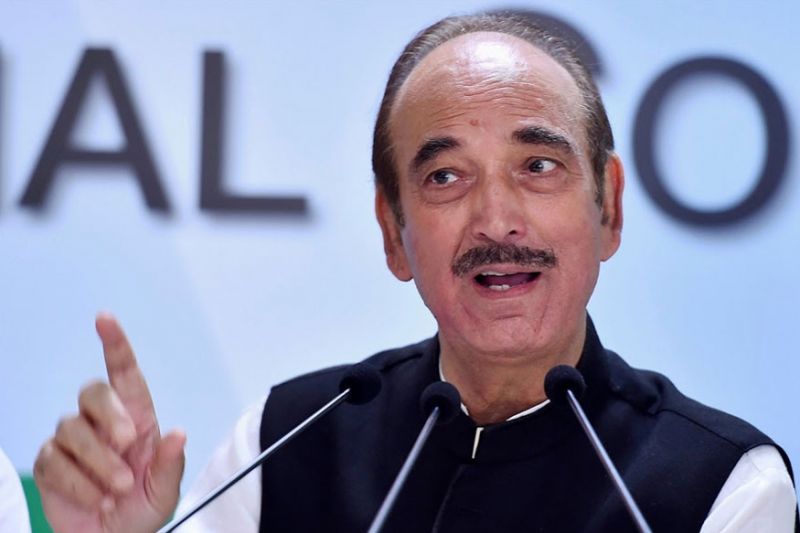 ‘Will go for alliance if situation demands’

Gopal Sharma
JAMMU, July 20: Leader of Opposition in Rajya Sabha and All India Congress Committee (AICC) general secretary, Ghulam Nabi Azad today said that no Government is possible after fresh Assembly elections in J&K and the Congress may go for alliance if the situation demanded.
Addressing senior party functionaries from different parts of Jammu region in the winter capital city here today, Azad said if the elections are held in the State in near future, Congress will emerge as major party but it is certain that no Government is possible in the State without support of the Congress. He asserted that Con-gress will play a crucial role in the coming Assembly elections.
“Till now there is no decision on the pre-poll alliance but if situation demanded, the party may go for alliance with any like minded party in the State,” Azad told party functionaries asking them to focus on their respective areas and project the basic issues of the public.
Referring to the “worst ever performance” shown by the BJP legislators in Jammu region during past three years and emerging strong resentment among the people against them, Azad said Congress will emerge as strong force in the State during the forthcoming elections. The next Government in the State is not possible without the support of Congress, he added.
Azad, who arrived here last evening to convene crucial meeting of the party functionaries from Jammu province with a motive of strengthening the cadre before the coming Assembly elections on the directions of party high command, said those who are in habit of ensuring their attendance before the top party leaders in Delhi are basically weak. “They should stop doing so. It is better for them to go to their respective constituencies/ areas and work at ground level and raise their strength.”
Taking many party leaders to task, Azad said, ” No one is above party. They should sink their differences, if any. If some one does not like the face of other party leader, he or she should take the party on priority, leaving aside their personal issues. They must understand that Party is supreme and they have to take everybody along even if they do not like them,” Azad cautioned.
Azad, who was today in mood of taking all the Congress leaders to task including former Ministers and legislators, warned party cadre to avoid becoming Whattsapp leaders. He asked them to reach out to the people at grass root level, identify their issues and problems and project them with strong voice. He said each Ward, Panchayat or block level worker/ activist should have close relations with the grass root level people. He asked them to work hard and infuse new life in the party for taking up major challenge of next Assembly elections. He asked them not to bother about the outcome of previous Lok Sabha elections as Assembly polls will quite different in the State.
Azad, a former J&K Chief Minister further said that he did not want to come back to the State but on the plea of the State cadre and directions from the high command he has now decided to stay here and work at ground level till the coming elections. In first phase for one month, all the party leaders would visit different areas and hold public meetings and then in second and third phases, he will accompany them to different areas across the State.
Sending a note of caution to everyone in the party, Azad said no one should expect that he or she would certainly get the party mandate in coming elections. The committee framed for the purpose by high command will decide about their fate and only those having mass base and massive public support will get the party ticket. The opinion of the general masses and party workers will matter, Azad maintained.
The AICC leader also took stock of the organizational activities and instructed the leaders to gear up their activities for the coming elections. He asked them to make Congress strong and vibrant force in all the three regions of the State.
Azad arrived here on Friday evening for three day tour. However, he will cut short his schedule to attend the last ritesof former Delhi Chief Minister, Sheila Dikshit tomorrow afternoon.
Azad also met the constituency and district level party functionaries from Jammu, Kathua, Samba, Udhampur, Rajouri, Poonch and Reasi. He would meet party leaders from Doda, Kishtwar and Ramban tomorrow morning and then leave for Delhi, a party spokesman said.
Prominent among those who attended the meeting included, PCC chief GA Mir, former DyCM Tara Chand, Madan Lal Sharma (ex-MP), Mula Ram, Raman Bhalla, Jugal Kishore Sharma, RS Chib, Dr Manohar Lal Sharma, Shabir Khan (former Ministers), Jahangir Mir, Manmohan Singh and Ravinder Sharma among others.