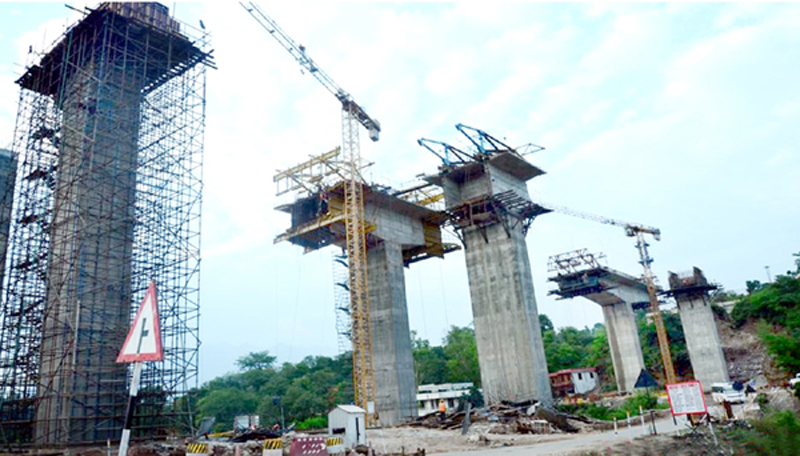 JAMMU, July 7: Shocking it may sound but it is a fact that there is no clue of Rs 8 crore worth Jhajjar Kotli Barrage Project, the foundation stone of which was laid by the then Minister for Irrigation and Flood Control nine years back in order to make this picnic spot situated at a short distance from winter capital more attractive.
The continuous indifferent attitude of the concerned authorities has led to strong resentment among the people of the area, who during the recently concluded Back to Village (B2V) programme, conveyed their anguish to the visiting bureaucrats and stated that real success of this programme would be judged from the revival of the project.
Official sources told EXCELSIOR that in order to make Jhajjar Kotli an attractive picnic spot for the people, the National Conference-Congress Government in the year 2010 decided to construct a weir/barrage.
Accordingly, the foundation stone of Rs 7.72 crore worth project was laid on June 19, 2010 and the work was allotted to Jammu and Kashmir Projects Construction Corporation Limited by the Irrigation and Flood Control Department. Even an amount of Rs 1.80 crore was released to the project executing agency in the month of March 2012.
However, work was not started by JKPCC Ltd on the ground that National Highway Authority of India (NHAI) had raised certain objections and funds to the tune of Rs 1.80 crore released to JKPCC Ltd were later diverted to some other works without the approval of the higher authorities in the Government.
Stating that project has vanished from the official records, sources regretted, “neither the previous PDP-BJP Coalition Government evinced any interest in finding the exact reasons behind inordinate delay in start of the project nor the Governor’s Administration has so far tried to ascertain the bottlenecks and status of Rs 1.80 crore released for construction of barrage at Jhajjar Kotli”.
This is notwithstanding the fact that issue was repeatedly raised by the former Member of Legislative Assembly from Nagrota constituency Devender Singh Rana in the House as well as at several other forums.
When contacted by EXCELSIOR, the concerned authorities of the Irrigation and Flood Control Department, Jammu and Kashmir Projects Construction Corporation Limited and Tourism Department, tried to put ball in each other’s court.
Though some of them admitted that a project was conceived long time back to make Jhajjar Kotli a spot of attraction for the tourists especially after construction of new National Highway yet they made it clear that it was not in the list of projects being executed by their respective departments.
It is pertinent to mention here that due to lack of required attention of the Government this picnic spot has become a preferred place for so many illegal activities and this issue was forcefully highlighted by the people of the area during Back to Village programme.
During interactive session with Commissioner/Secretary to Government, Forest and Environment Department M K Dwivedi, the people of Panchayat Jhajjar Kotli vociferously demanded creation of artificial lake by construction of barrage, the foundation stone of which was laid nine years back.
The real success of Back to Village Programme would be judged from the revival of the much-needed project and creation of other facilities by the Tourism Department, people explicitly told the officers during Back to Village programme.
What to talk of construction of barrage, the Government is also soft-paddling on the creation of facilities under the project titled “Development of Tourist Facilities at Jhajjar Kotli”, which has been sanctioned under Prime Minister’s Development Package for an amount of Rs 7.10 crore.
The project has numerous components which include iconic suspension bridge to connect main land and island, toilet block, parking with retaining wall, lighting, tourist benches, cafeteria at the island and eco log huts etc.
“Till date only bridge to connect main land with island has been completed while as work is at snail’s pace on other components”, sources informed.