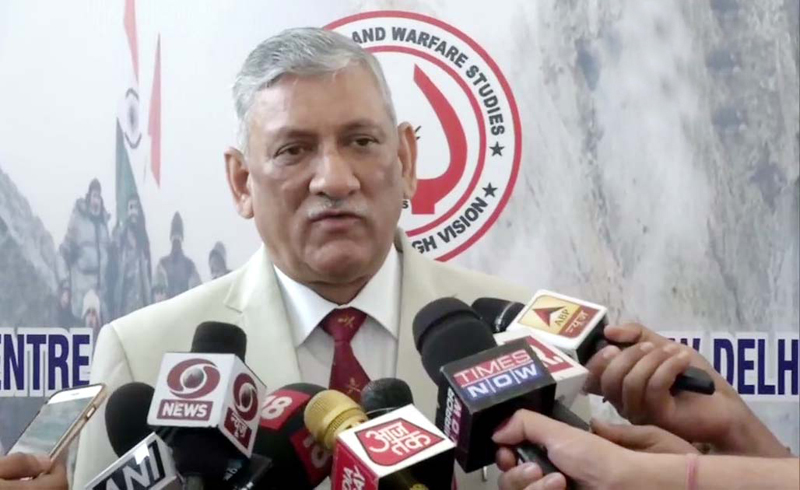 ‘Pak misadventure will be repelled’

Sanjeev Pargal
JAMMU, July 13: Army chief Gen Bipin Rawat today declared that no act of terror will go unpunished as the Indian Army stands resolute and ready to defend territorial integrity and that any misadventure by Pakistan army will be repelled with punitive response.
Speaking to reporters on the sidelines of a seminar to mark 20th year of Kargil victory and in his address to the seminar in the Union capital, Gen Rawat said: “Let there be no doubt that any misadventure by Pakistan army will be repelled with punitive response’’.
Asserting that surgical strikes post-Uri and Balakote strikes (after Pulwama terror attack) have amply demonstrated our policy and military resolve against terror, the Army chief said no act of terrorism will go unpunished.
“The rise of non-State actors and the readiness to use terror and other irregular methods of fighting have become a new norm. Addition of cyber and space domain has changed the battle field scenario,’’ he said.
Gen Rawat said the future conflicts will be “more violent’’ and “unpredictable’’ while technology and cyber domain will increasingly play a bigger role as the battlefield becomes more contested and at the same time will be seamlessly connected.
“The military must be ready for a multi-spectrum war. The Indian Army needs and is going through a transformation. The formation of the Space, Cyber and Special Forces divisions is indication of the transformation that the armed forces are going through,” he said.
The cross border strikes after Uri Brigade Headquarters attack in 2016, and Balakote air strike after the Pulwama suicide bombing in February this year not only demonstrate the political-military resolve but also another indication of the changes, the Army chief said.
Gen Rawat said India and China have different perspectives on the Line of Actual Control (LAC).
“There are gaps in between. So both sides patrol and come into each other’s areas. Chinese come and patrol to their perceived LAC which we try and prevent. We try and attempt to reach out to LAC or based on the limit of patrolling given to us, we visit those areas,” he said.
Sources had said some 11 Chinese in civilian clothes arrived in two vehicles when Ladakhi villagers were celebrating Dalai Lama’s birthday on July 6 in Demchok area of Eastern Ladakh sector.
They then showed them banners and waited there for 30-40 minutes but did not cross the Line of Actual Control before returning to their original positions. The Tibetans were celebrating the 84th birthday of the Dalai Lama.
“At times, there are celebrations that take place at the local level. Celebrations were going on our side by our Tibetans in the Demchok sector. Based on that, some Chinese also came to see what was happening”, Gen Rawat said.
When asked whether the Chinese People’s Liberation Army (PLA) soldiers were present during the July 6 incident, he said security officials from both sides accompany civilians whenever they visit the LAC.”
“When the civilians go forward, obviously there will be PLA and when our civilians go to LAC, the ITBP (Indo-Tibetan Border Police) or the Army will accompany them. We are not going to allow the civilians to visit the LAC without being monitored. So, both sides will monitor”, he said.
The matter was also raised in the flag meetings between the security officials of the two countries, the Army chief said.
Everything is normal. You need to dispel this myth that there has been any kind of intrusion or activity by the Chinese which is detrimental to our security, he said.
“We have a very good working relationship with the Chinese. Anytime such things happen, we have the local Commanders talking to each other. We are meeting regularly”, the Army chief added.
India and China share a disputed border and the Armies of the two countries were engaged in a stand-off for 73 days in 2017 in Doklam.