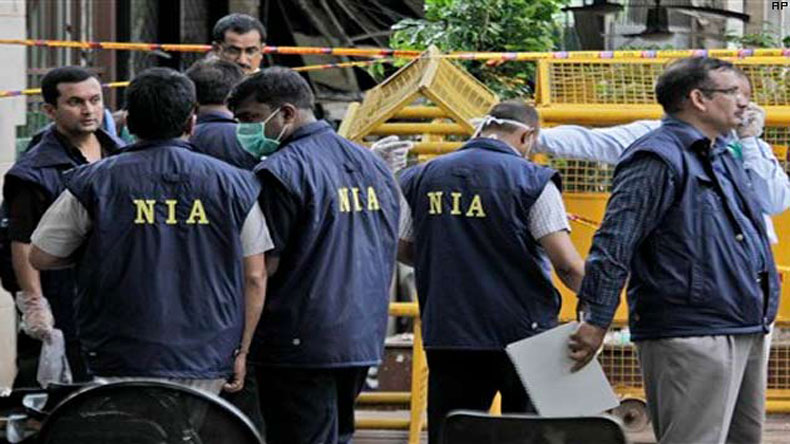 Sanjeev Pargal
JAMMU, Oct 12: In a major crackdown launched against Al Qaeda linked Zakir Moosa’s modules spread across three States of Jammu and Kashmir, Punjab and New Delhi, Police of 2 States, joined by the National Investigating Agency (NIA), today carried out simultaneous raids at Kashmir, Jallandhar and New Delhi in search of major modules of Gazbat-ul-Hind Ansar and have so far succeeded in apprehending two more ultras, taking total number of arrests during past three days, to five while over a dozen suspects have been detained for questioning.
Meanwhile, the Union Ministry of Home Affairs has handed over the case of Hizbul Mujahideen terror module having ramifications in three States including J&K, Uttar Pradesh and Assam to NIA, sources said. The case of three Kashmiri students-turned-militants’ arrest was also set to go to the NIA as Zakir Moosa’s network was also spread in J&K and it was trying to create ground for itself in Punjab and New Delhi.
Late tonight, the NIA conducted searches at Lajpat Nagar in New Delhi residence of a Kashmiri, Hilal Ahmad Rather in connection with terror funding module and recovered Rs 18 lakh in cash, six mobile phones, SIM cards and several incriminating documents including literature.
During the probe, it emerged that one Mohammad Salman, a resident of Nizamuddin, was in regular touch with a Dubai-based Pakistani national, who in turn was connected with the militants.
Sources said while an Assam youth was found working for Hizbul Mujahideen in Kashmir, two Assam youth were arrested in Kanpur, Uttar Pradesh few days back for Hizbul links. In view of involvement of three States, the Home Ministry has handed over the case to the NIA, sources said, adding there was strong possibility of the case pertaining to arrest of three Kashmiri militants in Jallandhar also going to the NIA.
Meanwhile, investigators have cracked a major plot hatched by Zakir Moosa to rattle New Delhi with serial blasts and targeted killings with the help of consignments of arms, ammunition and explosives, which were recovered from the hostel room of CT College of Engineering Institute and Management, Shahpur, Jallandhar from the possession of three arrested Kashmiri militants, who were studying B Tech and BSc at the college.
Official sources told the Excelsior that since Gazbat modules were spread over two States of Jammu and Kashmir and Punjab and Union Capital of New Delhi, the NIA teams have also joined searches.
Shoaib Ahmad of Noorpora, Tral in Pulwama district, another militant of Gazbat-ul-Ansar Hind and his associate, whose identity couldn’t be ascertained immediately, were arrested during overnight raids by the joint teams after their names were disclosed by three militants arrested in Jallandhar that they too were part of the module, which was planning to target New Delhi.
Arrested militants have been taken to Jallandhar for cross questioning with three already arrested students-turned-militants including Zahid Gulzar, 18, son of Gul Ahmad Rather and Idrees Shah son of Abdul Qayoom Shah, both residents of Rajpora Awantipora, Pulwama and Yasir Rafiq Bhat son of Rafiq Ahmad Bhat R/o Noorpora Tral, Pulwama, who happened to be the cousin of Zakir Moosa.
“The raids were now being conducted to smash modules of Zakir Moosa, which were spread over Punjab and New Delhi amidst reports that they were equipped with major consignments of explosive material and arms and all of them had been tasked to target New Delhi with serial blasts and killings as one of their major plot was earlier foiled by Jammu Police in August this year,” sources said.
They added that the raids were being conducted on the basis of disclosures of the arrested militants and major areas being targeted during searches were South Kashmir, Jallandhar, some other parts of Punjab and New Delhi.
As per the inputs obtained by the investigating agencies, a couple of Kashmiri militants had already reached New Delhi and were waiting for arrival of the consignment of weapons and explosives from Jallandhar to carry out terror strikes in the Union capital. Sources said police wanted to arrest the Kashmiri militants hiding in New Delhi at any cost as they could give valuable clues about Zakir Moosa’s activities in Kashmir, which he was trying to spread to the Union capital via Punjab.
Police believed that some more Kashmiri students studying in parts of Punjab were being used by Moosa’s outfit to dump arms and explosives before sending them to Delhi as the militants were finding it extremely difficult to dispatch the consignment directly to the capital city.
A similar attempt made by Zakir Moosa on August 7 had been thwarted by Gandhi Nagar police. Moosa’s associate Irfan Hussain Wani of Dangerpora, Awantipora in Kashmir, who was transporting eight highly sophisticated grenades from Kashmir to New Delhi was captured by police at Gandhi Nagar and live grenades were recovered from him. The militants had planned to carry out serial blasts in New Delhi on the eve of Independence Day. The entire plot was hatched by Gazbat-ul-Hind Ansar of Zakir Moosa and the militants involved in executing terror strikes were part of the outfit.
Sources said police teams from SOG Jammu, Punjab and New Delhi, joined by the NIA were confident of making more arrests in the next few days as some of the militants and their sympathizers were on the run after the arrests of three students-turned-militants in Jallandhar.
It may be mentioned that Gazi Ahmad Malik of Shopian was recently picked-up by Punjab Police from Banur, Patiala, where he was studying in Aryans Group Polytechnic College. It was learnt that Gazi was closely related to Adil Bashir Sheikh, the SPO who had fled with 7 Rifles from the residence of PDP MLA, Ajaz Mir’s house in Srinagar and was suspected to have joined Hizb-ul-Mujahideen, a militant group.
They said the busting of the terror module indicated efforts by Pakistan’s spy agency ISI to expand the arc of militancy on India’s western border.