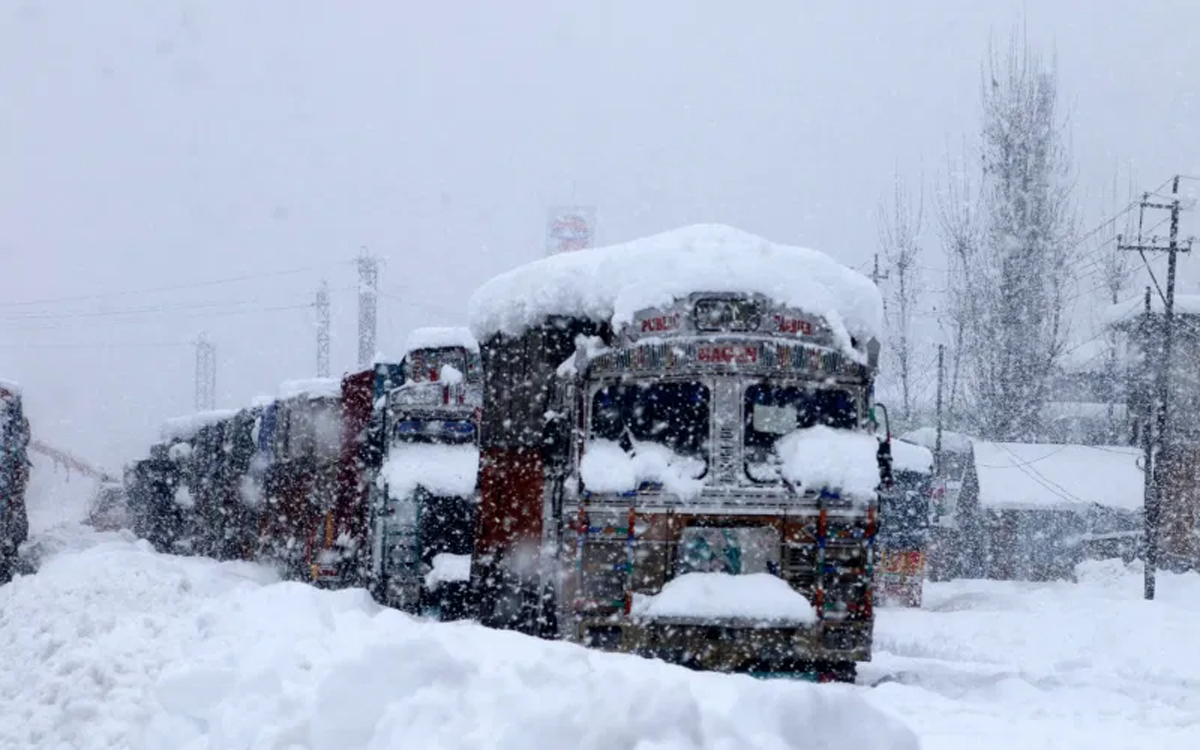 Gopal Sharma
SRINAGAR/ JAMMU, Jan 24: Barring Gulmarg and Pahalgam, the minimum temperature improved across Kashmir today with the mercury settling above normal for this time of the year for the second night in a row in Srinagar, air traffic resumed at Srinagar and the Jammu-Srinagar National Highway was restored in the afternoon.
Click here to watch video
Official sources said that air- traffic resumed at Srinagar Airport with morning flights getting delayed. However, traffic was normal in the afternoon.
The Jammu-Srinagar National Highway was restored this afternoon while two persons hailing from Kupwara in Kashmir were found dead in a stranded vehicle near Banihal during the day.
SSP National Highway, M L Kaith told the Excelsior that traffic on highway was restored at around 1 pm after snow from Shaitani Nallah to Jawahar Tunnel and Lower Munda was cleared today. The multiple landslides between Nashri and Banihal were also cleared before noon.
Kaith said about 1237 vehicles including 387 heavy carrying essentials and 850 LMVs crossed Jawahar Tunnel towards Kashmir by this evening. He said the road was very slippery in Jawahar Tunnel area and the movement was very slow during late this evening.
The movement of passenger vehicles was restricted tonight in Jawahar Tunnel area. He further said that in Udhampur Bypass, Dhar Road, Tikri-Falata, Manwal and Majalta areas of Jammu region over 1250 vehicles were stranded for the last two days. At first stranded vehicles will be cleared, he added.
District administration Ramban has issued advisory for highway commuters and asked them to confirm the status of the road from Traffic Police Control Rooms before starting the journey from Srinagar or Jammu side.
Official sources said that Shabir Ahmad Mir (32), son of Abdul Rashid Mir and Majid Ahmed Mir (35), son of Gulzar Ahmed Mir, both residents of Kralpora in Kupwara district, were on way to Srinagar in Tata Mobile vehicle No. JK09B/7358 but left stranded after snowfall around Jawahar Tunnel due to closure of the highway early Saturday. Their vehicle along with nearly other 250 vehicles had been stranded near Nowgam village.
They said the duo was found unconscious inside their vehicle this morning and rushed to Banihal hospital, where both of them were declared as brought dead. It was not immediately clear whether they died of severe cold or asphyxia. The police later said that a Kangri and some charcoal was also found in the vehicle. They said things will be clear after postmortem of the bodies.
Meanwhile, the deaths sparked protest by drivers and their co-passengers near Railway Chowk, Banihal. Senior police and civil officers including SSP Ramban rushed to the spot along with reinforcements and managed to bring the situation under control after chasing away a stone-pelting mob. Holding the Government responsible for the death of the duo, the protesters alleged that the Government should have allowed the stranded vehicles to cross the recently-completed Banihal-Qazigund tunnel.
The police later handed over the bodies to the family members of the deceased persons. The authorities allowed brief movement through new tunnel for emergency purpose.
A Meteorological Department official said that Srinagar recorded a low of minus 1.9 degree Celsius against minus 2.0 degree Celsius the previous night. The normal temperature for this time of the year in Srinagar is minus 2.3 degree Celsius.
The mercury settled at minus 12.0 degree Celsius in Pahalgam against minus 1.3 degree Celsius the previous night and was the coldest place across the valley.
Qazigund recorded a low of minus 3.0 degree Celsius against 4.0 degree Celsius the previous night while Kokernag recorded a minimum of minus 3.6 degree Celsius against 4.5 degree Celsius the previous night.
Gulmarg recorded a low of minus 11.0 degree Celsius against minus 4.8 degree Celsius the previous night. Against minus 0.4 degree Celsius the previous night, the mercury settled at minus 4.2 degree Celsius in Kupwara district of north Kashmir.
The weatherman has forecast mainly dry weather till January 31. The temperatures will again plummet bringing intense cold wave conditions back to the region.