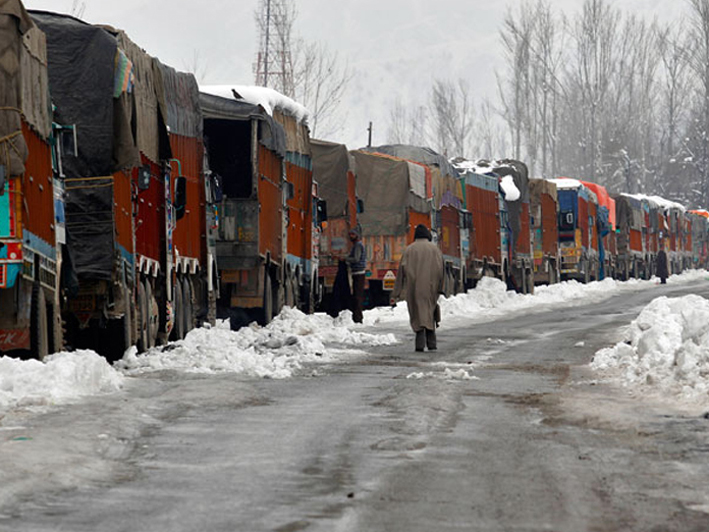 Excelsior Correspondent
Srinagar, Jan 17: Srinagar-Jammu National Highway was today re-opened for the traffic after remaining closed for four days while the air traffic resumed at Srinagar Airport after remaining disrupted for several days.
An official said that road was thrown open for Light Motor Vehicles (LMVs) this morning after the snow was cleared from the highway last evening by the Border Roads Organization (BRO).
The official said that 1500 LMVs crossed the Jawahar Tunnel this afternoon and it was followed by the movement of trucks. He said that so far 2000 trucks crossed towards Jammu.
The official said that 5000 trucks were still stranded and efforts were on to cross these trucks towards Jammu tonight. He, however, said that blizzards are creating problem for the traffic movement in Shaitan Nallan area. “The snow gets accumulated on the highway leading to slipper road conditions,” he added.
The official said that around 300 vehicles that were stranded on the highway crossed the Jawahar Tunnel. He said that these vehicles were stranded on the highway for last 5 days.
The official said that the traffic would be allowed to move from Srinagar to Jammu tomorrow. He added that the administration wants to clear the trucks stranded in Qazigund area besides fresh LMVs.
The train services in Kashmir valley resumed today after remaining suspend for four days due heavy snowfall in the Valley.
The train service plied from Srinagar to Banihal section today and most of the passengers took the train route to reach Banihal.
The air traffic that resumed partially yesterday resumed today bringing relief to the passengers who were stranded in Srinagar.
And despite the improvement in weather, the link roads in most parts of the Kashmir valley have not been cleared by the authorities yet.
The apple town of Sopore which was once called as ‘Chota London’ is buried under snow as authorities have for last four days failed to clear roads. Majority of the link roads were blocked with snow and cars were stuck on lanes and bylanes or courtyards buried under snow. Residents of the town said that they have not seen such on indifferent administration so far.
The residents of South Kashmir Pulwama district said that their villages were still disconnect with their headquarters. The villagers of Sangerwani, Sonubanger, and Killer, Bihama, Hajin, Tral and adjoining villages said they were facing immense hardships.
Similar reports were received from Beerwa Budgam where residents complained that the link roads in the area have not been cleared yet by the authorities.
The important roads including Beerwah- Punzoo, Beerwah -Zabhul and others in the area have not been cleared. All the link roads in the district were yet to be cleared of snow.
Residents of Handwara and villgam also complained that the link roads in these areas were still closed due to which they were facing trouble.
The residents of Haril,Drungsoo, Khuri, Kukroosa, Kalipora, Golipora, surajpora and other villages said the authorities have completely failed to clear the link roads in the area. They said only main link roads in these areas have been cleared by the authorities “How could we reach to the hospitals when the link roads in these villages area are closed with heavy snow”? they asked.