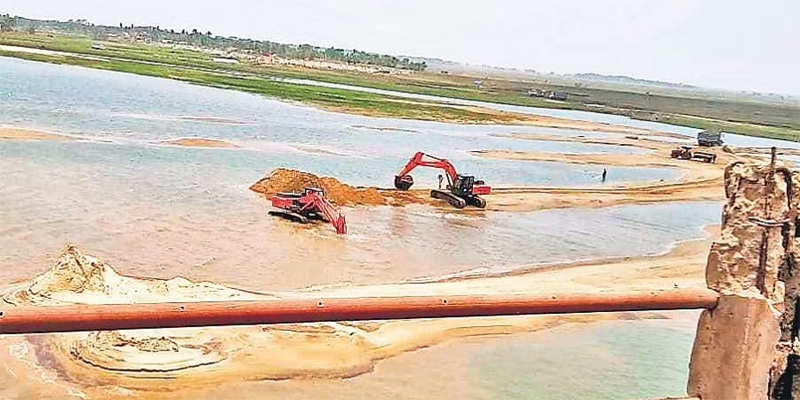 Excelsior Correspondent
Srinagar, Aug 16: The National Green Tribunal (NGT) has directed for an immediate halt on the riverbed mining (RBM) in Shali Ganga stream in Budgam by a Gurgaon-based construction company-which is executing the work on Srinagar Ring Road-while it underlined that the necessary clearance was granted without carrying out the replenishment study.
A double-bench of NGT passed the order-after an appeal was filed by a social activist and Chairman RTI Movement Dr Raja Muzaffar Bhat-in which it has been stated that the environmental clearance was granted without any replenishment study, which it said, was in violation to the Sustainable Sand Mining Management Guidelines, 2016 and Enforcement and Monitoring Guidelines for Sand Mining, 2020.
A bench comprising Justice Sudhir Aggarwal and Prof A Senthil Veil, an expert member also restrained M/s NKC Projects Pvt Ltd from carrying out the riverbed mining in Shali Ganga stream in Trumbi Bagh, Lalgam Panzan area of Chadoora tehsil in Budgam District.
“…Since it has been prima facie shown that no replenishment study was conducted, till disposal of the appeal, we restrain Respondent No 4 (NKC Project) from carrying out any mining activities pursuant to the impugned ECs,” the NGT order said.
It further said: “During the course of the argument it has been brought to our notice that environment clearance in question in this appeal was granted without any replenishment study…and hence ex facie EC granted to R-4 (M/S NKC Projects Pvt Ltd) which has been challenged in appeal are illegal.”
It is to be noted here that the Shali Ganga stream starts from the Tatakoti Glacier in the Pir Panjal mountain range as a tributary of the Doodh Ganga, which then again becomes the tributary of the Jhelum River.
Further, as per details, the mining site of the Shali Ganga is already over-exploited and is not said to be fit for mining, while experts believe that the same will result in disruption of flow in the stream which will further impact the Hokersar wetland conservation area.
In the appeal which was filed by the activist, it was also noted that the mining in the riverbed is a massive danger to the river embankments and can cause floods during the rainy season.
Dr. Raja Muzaffar Bhat told Excelsior that the grant of Environmental Clearance (EC) for minor minerals by NKC Projects Pvt Ltd in the Shali Ganga stream is in violation of Jammu and Kashmir Minor Mineral Concession, Transportation of Minerals and Prevention of Illegal Mining Rules, 2016 and specific and standard guidelines of J&K State Environmental Impact Assessment Authority (JKSEIAA).
“I have been bringing the matter to the notice of the JKSEIAA, but they did not act and what is questionable here is how can a construction company excavates Riverbed Material (RBM) and use it for highway construction; in reality, the same has to be sold to the local population on a 50 percent discount,” he said.
Dr. Bhat also said that what the company was doing was simply loot and plunder and, as per him, had made an illegal road through paddy land. “The concerned company as well the local revenue officials should be taken to task. I am going to raise this issue before NGT,” he said.