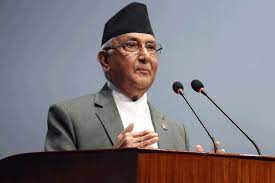 KATHMANDU, May 10: Nepal’s embattled Prime Minister K P Sharma Oli, seeking a vote of confidence in the House of Representatives on Monday, appealed to the party leaders and cadres to remain united and not to indulge in resignations and other factional activities.
Oli issued the statement after the media outlets reported that the rival faction of the Communist Party of Nepal (Unified Marxist–Leninist) led by senior leaders Madhav Kumar Nepal and Jhalanath Khanal were preparing to resign from the House of Representatives ahead of Oli’s floor test.
Oli, 69, requires at least 136 votes in the 275-member House to win the confidence motion as four members are currently under suspension.
Without naming Nepal or Khanal, Oli said attempts were being made to disintegrate the party, The Himalayan Times reported.
In some places, attempts are being made by leaders to defeat their own party and benefit Opposition parties. In some places, party lawmakers have crossed the floor and no trust motions have been filed against their own government. Now they are trying to promote en masse resignation of party lawmakers, Oli said in his statement.
He appealed to all the lawmakers from his party to not rush into taking any untoward decision.
“Let’s sit together, discuss and solve the existing problems,” he said.
He said the rival faction had the tendency to ensure that their own party’s government failed at all the levels of government to enable opposition parties to win against the CPN-UML.
Terming the factional activities a crime, Oli urged all party leaders and cadres not to indulge in anti-party activities.
“We have built this party, and I am confident that honest leaders and cadres will not indulge in any activity that could harm the party,” he said.
Oli urged the party leaders not to believe the rumour that he would protect favourites and sideline others in the party.
The prime minister said that the party’s new generation had the responsibility of strengthening party unity.
Earlier on Monday, Oli sent his confidants Subas Chandra Nembang and Bishnu Prasad Paudel to Madhav Kumar Nepal to hold talks with him, but the differences continued to persist, the report said.
The Nepal-Khanal faction has demanded that recent changes made in the party structures by Oli be reversed and the party’s committees and structures that existed before the UML’s merger with the CPN-Maoist Centre be revived.
A special session of the lower house of Parliament has been called for Monday when Prime Minister Oli will try to win the confidence of the 275-member house to prove that he enjoys majority support, aiming to consolidate his grip in the party.
His appeal comes at a time when the main opposition party Nepali Congress has decided to vote against the motion while even the Mahato-Thakur faction of the Janata Samajwadi Party- Nepal decided to make a last-minute ditch by staying neutral and not voting in favour of Oli, as opposed to their earlier promise of doing so. (PTI)