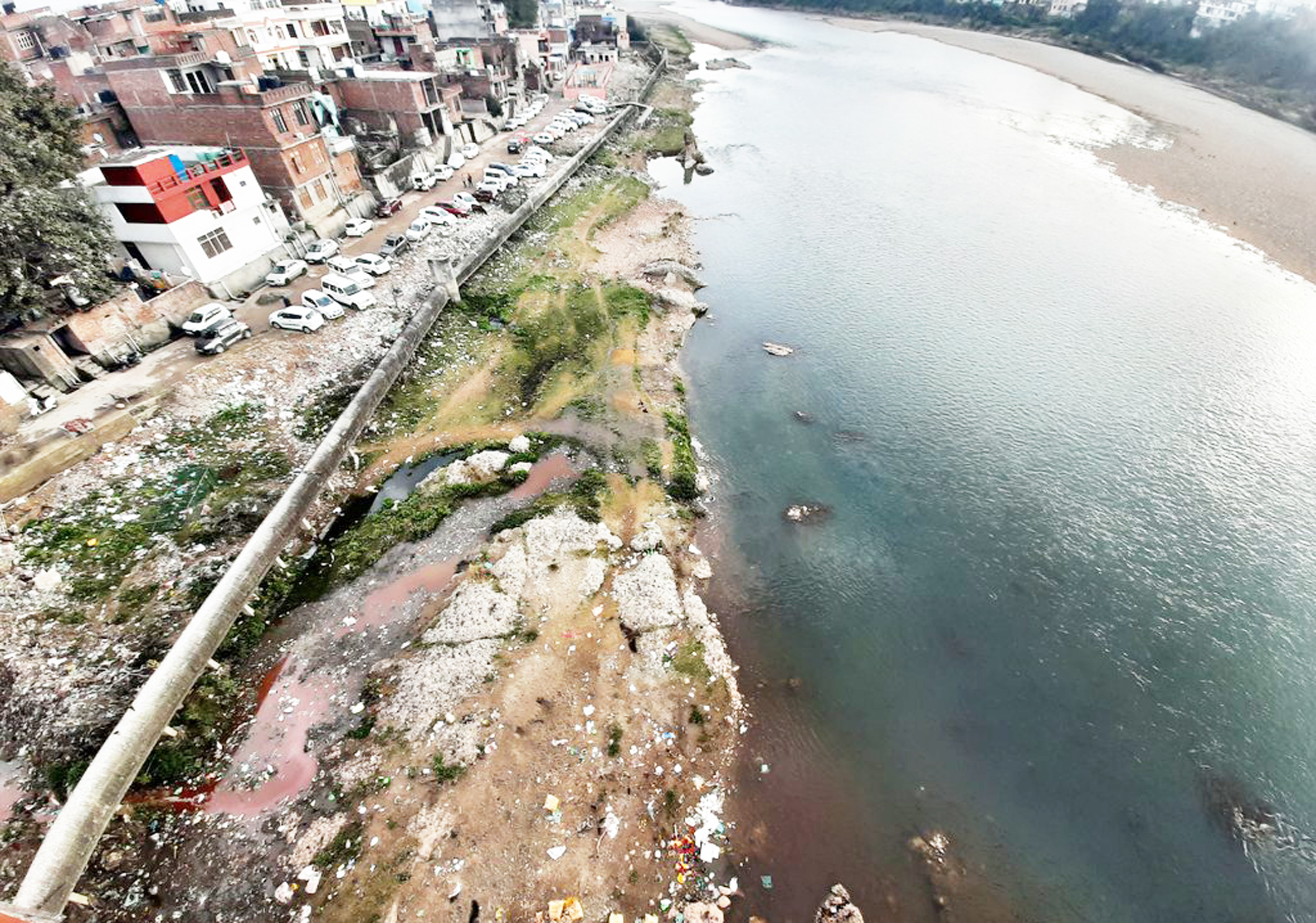 Dr. Satwant Singh Rissam
Remember the time when we were told by our elders about the rushing waters in the Tawi river. It wasn’t so long ago. Now when you look around the dry bed of the Tawi river it makes us realize that this river is almost dead. These days when we navigate for our work lives over any of the Tawi bridges in Jammu, the dumps of garbage are easily visible on the river bed. Well, let’s not hesitate to say that the river with religious beliefs and cultural heritage attached to it has no caretaker. Since centuries, this river has been revered by the people in Jammu yet no one could stop it from reaching this present day position. While on Earth Day’s and other days dedicated to environmental protection, slogans to save it are continuously being raised but the result shows a picture of neglect. In fact, this ‘slipping situation’ was created by those sitting comfortably in their offices and who assumed themselves to be the real ‘power center’ by always ridiculing every opportunity to save this heritage of Jammu. Now it indicates that standing tall in a social-political-civil circle isn’t enough to save this river.
Flowing down from glacial sources of Sudhmahadev ranges in Udhampur to reach a stage where its bed is dry now, these days this river has an important proposed project of ‘artificial lake’ on it. In future, this river will become a place for recreational boating once the proposed project takes shape. The State Pollution Control Board should shoulder the responsibility for failure to save this river as till today large amounts of waste packed in polythene go into the river on a daily basis without being checked by the Board. They have many schemes of segregating the biodegradable and non biodegradable waste but that all lies in the books of the board. Only the State Pollution Control Board should not be blamed because the most polluted stretch of river Tawi is within municipal limits and Jammu Municipal Corporation is also the agency that is responsible for the control and prevention of the pollution in the river. The degradation of Tawi river reflects that by just preparing several DPR’s in office for controlling pollution in Tawi river and occasionally requesting the general public through hoardings to keep the river ‘Tawi Clean- Green’ Jammu Municipal Corporation has failed to educate people about the pollution-free Tawi.
In the backdrop of everything that has happened, one thing is very clear that taking serious note of the rising pollution in river Tawi was never a priority. The situation is alarming in nature now because this river is fully polluted and contaminated to an extent that people don’t even want to take a dip in it. Simply the main reasons for this pollution were discharge of untreated sewage, effluents, erosion, transportation and sedimentation of rocks, soils, agriculture runoff. Moreover, solid waste dumping sites created adjacent to the bank of river Tawi was a big blunder which also contributed to pollution of Tawi water.
All this could have been very easily taken into account but nobody cared to work comprehensively against any of these factors because of the reasons best known to them. So far several crores have been spent to clean this river under Atal Mission for Rejuvenation and Urban Transformation (AMRUT), Smart City Mission of Ministry of Housing and Urban Affairs, Mahatma Gandhi National Rural Employment Guarantee Scheme (MGNREGS) etc. but no change is visible for revival of this dying river. Various environmentalists have pointed out through quantitative analysis of pollution and pathogenic bacteria of river Tawi about drastic change in water of Tawi and this is really dangerous for future generations. Several health issues are bound to rise with such changes seen in the water of Tawi, which presently is the main source of drinking water supplies for Jammu city and its outskirts.
Economy of Jammu also relies heavily on agriculture and lower availability of water in Tawi for irrigation will impact the agrarian economy of Jammu. And this loss will be the greatest challenge for Jammu over the coming decades. Let’s look closer and try to state in more simple words that with drying up of Tawi we lost our biodiversity that provided habitat for plants and animals. Just due to non-implementation of various acts and laws to save Tawi water we have reached this position. The judicial intervention in it through PILs played only a limited role to stop this deterioration of the Tawi. Clearly, large scale construction in Jammu and illegal mining wreaked havoc and created the ‘death bed’ for this river. Perhaps, it is silly to believe that we never had effective remedial measures vis a vis technologies available to save this polluted river. We don’t need to play games any longer to save Tawi, the only thing needed is the effective implementation of various laws, schemes, policies etc. This ‘Suryaputri’ which acts as a lifeline in the lives of people should be saved before talking of its transformation.
The local community of Jammu has to play a big part to make people here self disciplined, aware and responsible to protect this river. Only choosing to go for a complete makeover of this heritage river in our hands won’t serve for long. The need is for permanent commitment to save Tawi. Moreover, the heritage, religious value of ‘Suryaputri’ should be a priority because only thinking of the economic value of this river will just add to the death of river Tawi.