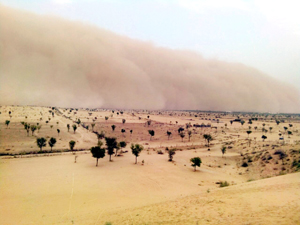 LUCKNOW/JAIPUR, May 3: A severe dust storm followed by thunder showers hit parts of Uttar Pradesh and Rajasthan overnight,  killing nearly 100 people and leaving a trail of destruction. Click here to watch video
Houses collapsed and trees and poles were uprooted in the storm that also led to power outages.
In Uttar Pradesh, the high-intensity dust storm left 64 people dead and 47 injured.
In Rajasthan, 33 were killed, taking the combined death toll to 97. About 100 people were injured in the State, officials said.
In UP, Agra district was the worst hit, accounting for 36 deaths and injuries to 35 others, officials said.
Besides Agra, the other affected UP districts were Bijnor, Bareli, Saharanpur, Pilibhit, Firozabad, Chitrakoot, Muzaffarnagar, Rae Bareli and Unnao.
In Rajasthan, Dholpur district was the worst affected with 17 killed.
Two of those killed in Dholpur were from Agra in Uttar Pradesh.
“A few people are undergoing primary treatment while others were discharged. One critical patient from Dholpur was referred to Jaipur,” Hemant Kumar Gera, Secretary, Disaster Management and Relief, said.
A detailed report of the disaster is awaited even as relief and rescue teams have been pressed into service to clear debris and restore power supply, Rajasthan he said.
Gera said contigency funds have been released to the respective district administration. He said Rs 4 lakh will be given to family members of deceased, Rs 2 lakh to persons sustaining 60 per cent injuries and Rs 60,000 to people with 40 to 50 per cent injuries.
Expressing sorrow at the loss of lives due to dust storms in Uttar Pradesh and Rajasthan, Prime Minister Narendra Modi today directed officials to coordinate with States to ensure speedy relief and rehabilitation of those affected.
“Saddened by the loss of lives due to dust storms in various parts of India. Condolences to the bereaved families. May the injured recover soon,” the Prime Minister’s Office tweeted quoting Modi.
Rajasthan Chief Minister Vasundhara Raje expressed grief over the calamity and said authorities concerned in the districts have been directed to ensure all possible help to victims.
“Condolence for families who lost their loved ones,” she said on Twitter.
Taking note of the havoc caused by the dust storm in UP, Chief Minister Yogi Adityanath has directed officers concerned to personally monitor relief operations and provide all necessary medical facilities to the affected.
He also said that no laxity will be tolerated in providing succour to the needy. (PTI)