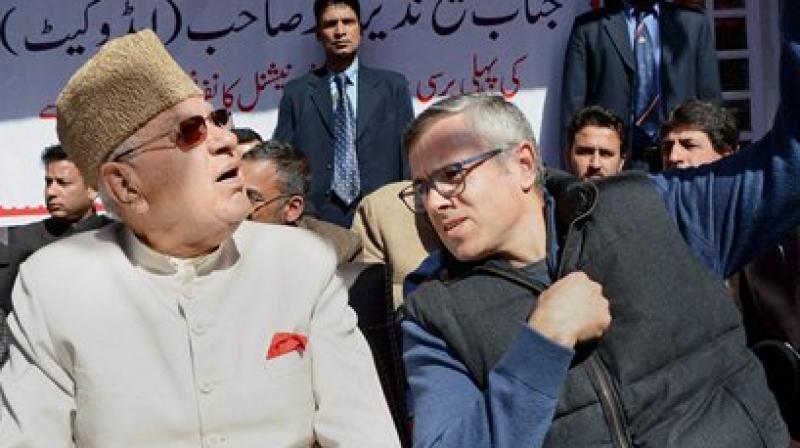 Sanjeev Pargal
JAMMU, Mar 18: The National Conference Parliamentary Board (NCPB) today decided to contest all six Parliamentary seats in the State without alliance with any political party but left the final decision to party president, Dr Farooq Abdullah, who will take a call tomorrow morning when the Parliamentary Board will meet again while the Congress also hardened the stand saying they too would like to contest four Lok Sabha seats and can leave only two for the NC in the event of a tie-up or, otherwise, will field candidates in all six constituencies.
People’s Democratic president (PDP) president Mehbooba Mufti reached here this afternoon and will meet party leaders for two days to take call on the party candidates as the PDP would announce list of its candidates in next two-three days.
Sources told the Excelsior that the National Conference Parliamentary Board met in Srinagar for three hours this afternoon under the chairmanship of party president, Dr Farooq Abdullah in which all Core Group members asserted that the party should contest all six Lok Sabha seats and shouldn’t go for alliance with any political party including the Congress with which it was in talks over a tie-up.
However, the Parliamentary Board members left the final decision up to Dr Farooq Abdullah, who said in the meeting that the party had to see large national interest as well as secular forces. In view of this, the NC Core Group will meet again at 10 am tomorrow to take final call on alliance and candidates for the Parliamentary constituencies.
Sources said Dr Abdullah could speak to some Congress leaders during the night or tomorrow morning on 4:2 seat sharing formula offered by the National Conference.
The National Conference Parliamentary Board has, meanwhile, confirmed the candidature of Dr Farooq Abdullah for Srinagar and Mohammad Akbar Lone for Baramulla Lok Sabha seats.
The Parliamentary Board comprised Dr Farooq Abdullah, Omar Abdullah, Ali Mohammad Sagar, Abdul Rahim Rather, Mohammad Shafi Uri, Mian Altaf, Choudhary Mohammad Ramzan, Akbar Lone, Devender Singh Rana, Surjit Singh Slathia, Ajay Sadhotra and Nasir Aslam Wani among others.
The National Conference leadership in its meeting with the Congress high command had ruled out any alliance with the party in Assembly elections and offered two Lok Sabha seats to it while keeping four in the Parliamentary polls. The Congress had insisted on 3:3 seats sharing formula on the pattern of 2014 Lok Sabha elections.
Meanwhile, PCC (I) president, GA Mir today said the Congress would like to contest four Lok Sabha seats in the State and can leave only two for the National Conference if the latter wants to have an alliance with their party.
“We will contest four in the event of a tie-up with the National Conference or, otherwise, we are ready to field candidates on all six seats,” Mir told the Excelsior.
Asked which four seats the Congress would contest if it had alliance with the NC, the PCC (I) said names of the seats can’t be revealed but, in no case, we will contest less than four.
Mir said the Central Election Committee of the Congress will meet in New Delhi in next couple of days and clear names of the party candidates for the Lok Sabha seats, which will go to polls in first two phases on April 11 and 18, both in the event of alliance or no alliance.
Jammu-Poonch and Baramulla-Kupwara Lok Sabha seats will have voting in first phase while Udhampur-Doda and Srinagar-Budgam seats will go to votes in the second phase.
“We have no communication channels with the PDP for seat sharing agreement,” Mir said.
Meanwhile, PDP president Mehbooba Mufti reached here this afternoon on a two-day visit during which she will meet top party leaders for discussions on the names of party candidates for two Lok Sabha seats of Jammu region. Names of Zulfkar Choudhary, former Minister and Surinder Choudhary, MLC among others were under consideration for Jammu-Poonch seat while Firdous Tak, former MLC was front-runner for Udhampur-Doda constituency.
PDP chief spokesman Rafi Ahmad Mir said the party would announce names of its Lok Sabha candidates very soon.
“We are not in talks with the Congress for any kind of tie-up for Lok Sabha seats,” Mir said.
Meanwhile, the Jammu & Kashmir National Panthers Party (JKNPP) has announced two candidates for Kashmir Lok Sabha constituencies.
A party spokesman said that Jahangir Ahmed Khan will contest from Baramulla constituency and Abdul Rashid Ganie from Srinagar. Names of the candidates were approved by the Parliamentary Board of the party.
He said the name of the contesting candidate for Srinagar Lok Sabha seat will be announced shortly.
The party has authorized all the contesting candidates to file their nomination forms in their respective constituencies.
The spokesman said Parliamentary Board has already been constituted.
Harsh Dev Singh, party chairman is the president of the Board, whereas, Balwant Singh Mankotia, NPP president, PK Ganju, Mohd Iqbal Chowdhary, Masood Andrabi (vice presidents), Anita Thakur & Manju Singh, Yashpaul Kundal ( general secretaries), Farooq Ahmed Dar (Provincial president-Kashmir), Rajesh Padgotra (Provincial president-Jammu), Bansi Lal Sharma (Advisor-NPP) and Virender Thakur (President NPSU) will be Members of the Board.
Prof Bhim Singh is the Honorary Advisor of the Parliamentary Board.