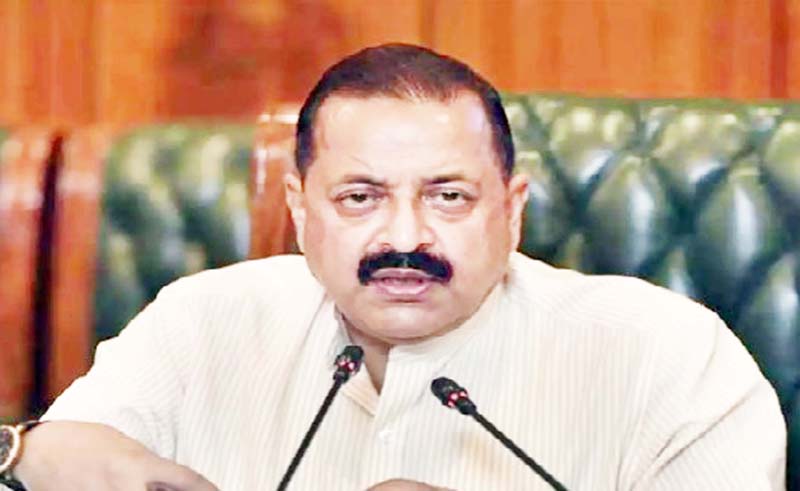 Excelsior Correspondent
NEW DELHI, May 13: Union Minister of State (Independent Charge) Development of North Eastern Region (DoNER), MoS PMO, Personnel, Public Grievances, Pensions, Atomic Energy and Space, Dr Jitendra Singh said here today that Kashmir-centric leaders, particularly of National Conference ((NC) and PDP as well as Kashmir unit of Congress, are rattled by the Balakot air-strikes and are unable to digest the country-wide popular support received by Prime Minister Narendra Modi for the first-ever anti-terrorist action of its kind launched against Pakistan in the last 70 years.
Without naming anybody, Dr Jitendra Singh came down heavily on the National Conference and PDP leaders when his attention was drawn to some of the uncharitable Tweets put up by the leaders of these two parties in response to Prime Minister Narendra Modi’s revelation that the air-strikes were allowed to happen in spite of the cloudy weather, which actually proved to be a blessing in disguise, thus allowing the Air Force pilots to perform their mission without being detected by Pakistani air-radar. He said, much harm has been done to the nation by these lesser-knowing twitter savvy activists who consider themselves to be “know alls”.
Hitting out at National Conference and PDP for spreading a misinformation campaign that Modi and BJP sought votes in the name of national security and nationalism, Dr Jitendra Singh said, while we are proud that we are seeking votes on the basis of our pledge and commitment to the national security of India, it is for the NC and PDP leadership to regret that they have not been able to sell the slogan of so-called Autonomy, pre-1953 status, self-rule, etc. Such NC leaders who accuse us of raising the sentiment of “Bharat Mata Ki Jai”, he said, should be ashamed of the fact that their attempt to sell the separatist and pro-Pakistan sentiment has been out-rightly rejected by the people and the NC leadership has quietly conceded that it is the BJP and its commitment to “Bharat Mata Ki Jai” which will reign supreme during and after the election.
Coming down heavily on the Congress and National Conference leaders who accuse BJP of lack of development in the State in the last five years, Dr Jitendra Singh said, it is, on the contrary, for the NC and Congress to explain why they could not bring about development in the last six decades and what was their contribution till 2014 before the BJP came into power. He said, it is ridiculous that NC leaders go around giving interviews and shedding crocodile tears over poor development in the hilly regions of State from where their Party representatives were Ministers for over half a century.
Dr Jitendra Singh challenged any Opposition leaders to compare the last five years of development in J&K with any other earlier five years Parliamentary term. He said, we are fortunate to redeem the sins of Congress and NC, but we will not allow these Parties to pass on their sins to us, which we shall continue to expose and keep reminding people day after day.

Relatives protest as woman dies for want of ambulance

Gang of highway robbers busted, one held with toy guns

Still under house arrest, now lock put on gate from inside also: Soz