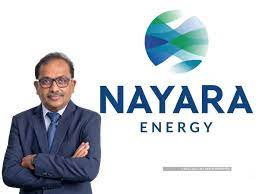 New Delhi, Sept 10: Nayara Energy, India’s second biggest private oil refiner, on Saturday announced the appointment of Prasad K Panicker as the new chairman of the company with effect from October 3.
Panicker, who currently is Director and Head of Refinery at Nayara, will replace Charles Anthony (Tony) Fountain, whose five-year term is ending, the company said in a statement.
Russia’s Rosneft-based Nayara operates a 20-million-tonnes-a-year capacity oil refinery at Vadinar in Gujarat and over 6,500 petrol pumps in the country.
“Despite a very challenging external environment, Nayara Energy has developed a clearly articulated strategy for a phased expansion into petrochemicals. The first phase of that development plan, the expansion into polypropylene, will be delivered next year,” it said.
Nayara has significantly expanded and focused its CSR (Corporate Social Responsibility) role with a commitment to ensure that the communities in which it operates develop and grow alongside it.
“At the new stage of its growth journey, Nayara Energy would focus on implementation of its cutting-edge asset development programme to transform itself into an integrated petrochemical producer, while continuing thoughtful implementation of its ESG initiatives, with strong impact on employees and local community well-being and environmental sustainability.
“In his new role, Panicker will deploy his outstanding technological experience and excellent knowledge of the local Indian market to lead Nayara Energy through a new set of strategic priorities with strong focus on development projects,” the statement said.
Panicker will also continue with his critical leadership role as Head of Refinery, which will support hands-on implementation of Nayara Energy’s ambitious development programme. (PTI)