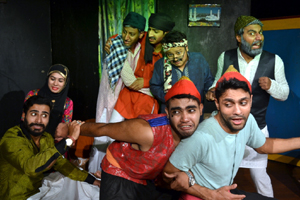 JAMMU, Apr 15: This Sunday, Natrang presented a hilarious performance of an Urdu comedy play, ‘Jhootha Khwaab’ in its weekly theatre series, Sunday Theatre.
The play has been written by Shawkat Thanvi and directed by Neeraj Kant. The play opens at a room of one ‘Jhumman Miya’ who had a nightmare that he is going to die after two hours. His father and grandfather visited him in a dream that he shall go to them at 4:00 am sharp.
As he had impression that they would never tell a lie to him, he got scared and wakes up in the fit of fear that he is going to die in just two hours. He calls every one present at the home, his wife and servants, to narrate the unfortunate incident. But the dramatic turn was this that he was more bothered about settling the financial accounts with the people rather than leaving this world.
He wanted to update his wife about all his financial transactions and how much money he still has to recover from people and gives a stern direction that she shall not let a single penny unrecovered from the people after he leaves this world to which she replies that there would be no fun of collecting the money if he is not with her and prays that this dream turns to be a false dream.
But ‘Jhumman’ was more materialistic, who was not ready to leave his materialism even at the end of his life, he settles the accounts with his servants also and even levies penalties on them for their carelessness during work.
Exactly at 4 am, he goes to sleep and considers that he is dead as per the prophecy, his wife started wailing and crying to which even neighbours arrive to mourn but after some time, hearing the noise, he wakes up and realizes that he is not dead and the dream was a false dream.
Natrang young artists who acted in the play were Goutam Sharma, Mohit Kaul, Meenakshi Bhagat, Gautam Kumar, Ajay Kumar Lalotra, Sushant Singh Charak, Shivam Sharma and Manoj Kumar Lalotra. The lights of the play were designed and executed by Shivam Singh whereas music was scored by Bhisham Gupta. Mohd Yaseen coordinated the show.