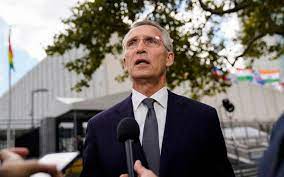 United Nations, Sept 22: With some powerful NATO allies at odds over a submarine sale, the group’s leader has suggested that members need to focus on “the big picture” and not let the dispute between France and the US and Britain open an ongoing rift.
During an interview on the sidelines of the UN General Assembly, NATO Secretary General Jens Stoltenberg also was cool to the notion of developing a separate European military force and said NATO needs to give careful consideration to any future deployments to fight terrorism after the 20-year war in Afghanistan.
A US and British deal to supply nuclear-powered subs to Australia — which had been set to buy diesel-powered ones from a French company instead — has France crying foul, with support from European Union diplomats.
But NATO Secretary General Jens Stoltenberg didn’t take sides in speaking to The Associated Press, instead emphasising cohesion about the alliance’s major goals.
“I fully understand France’s disappointment. At the same time, NATO allies agree on the big picture on the most important challenges, and that is that we have to stand together” to address common challenges, including a shifting global balance of power, he said.
Stoltenberg said he was confident that France, the UK and the US “will find a way forward and to not make this disagreement create lasting problems for the alliance, because we all see the need for allies to stand together and to continue to modernize and adapt NATO.”
Still, the submarine spat has introduced tensions into a 72-year-old military and political alliance that prizes consensus and was formed to try to avoid such conflicts.
French officials have repeatedly decried the sub deal as a betrayal, with Defense Minister Florence Parly describing it Tuesday as “breach of trust between allies and a strategic turning point.” European Union foreign ministers expressed solidarity with France after a meeting on the assembly sidelines Monday night.
Australia argues that the submarine deal was about protecting its strategic interests amid broad concern about China’s growing assertiveness.
The UK and the US have insisted the disagreement shouldn’t shake up their overall relationships with France, with British Prime Minister Boris Johnson saying the deal wasn’t meant to be a “zero-sum” arrangement and is “not something that anybody needs to worry about and particularly not our French friends.”
The episode – which came weeks after the fraught, bloody US withdrawal from Afghanistan had NATO members scrambling to get people out – has stirred some European interest in more military autonomy.
EU ministers recently debated creating a standby force of around 5,000 troops to deploy in crises such as the Afghanistan airlift. The idea reflects longstanding French and German proposals but faces opposition from some other NATO-member EU nations.
Stoltenberg said more European investment in defense is welcome, though “not as something that happens outside NATO, but something that happens inside NATO.”
“Any attempt to weaken the trans-Atlantic bond between Europe and North America will not only weaken NATO, it will divide Europe,” he said. “We have one set of forces, and we have to make the most available for NATO.”
NATO’s provision for common defense was invoked after the 9/11 terror attacks in the US, leading to NATO involvement in US-led war in Afghanistan.
It ended with Taliban militants retaking the country, 20 years after being ousted by western forces for harbouring the plotters of 9/11.
The chaotic pullout flew over 1,00,000 people to safety but was beset by terror attacks, including a suicide bombing that killed more than 160 Afghans and 13 US service members.
As NATO looks to learn lessons from the war and its end, Stoltenberg said the alliance will have to stay ready to combat international terrorism but needs “to think through carefully the targets, the goals, of the mission, and also to understand that the more we’re able to stabilise countries without deploying thousands of troops in combat missions, the better.”
Earlier Tuesday, US President Joe Biden called the NATO alliance “sacred” in his General Assembly speech, striving – despite the frictions of recent months — to turn the page on former President Donald Trump’s “America first” approach to foreign policy.
Stoltenberg said he welcomed Biden’s speech and his country’s “increased engagement” in the alliance. (AGENCIES)