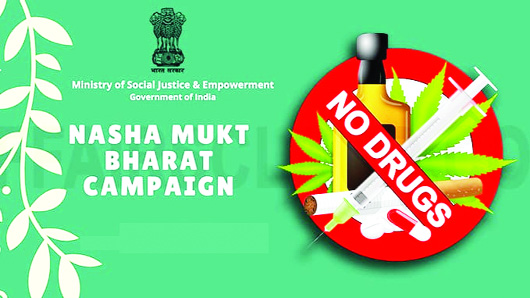 Mahfooz Ahmad Bakshi
Unfortunately! The entire world is facing the menace of drug addiction, which of course has a terrific impact on societies! For decades, we have faced horrible and grave challenges, but somehow we eradicated them, so we thought the time of suffering has elapsed but then out of sudden a new filthy problem came into existence and that is drug addiction, it’s prevailing everywhere and ruthlessly deteriorating the pulchritudinous nature!
26th of June is being celebrated as International Day Against Drug Abuse And Illicit Trafficking. On That day, we spread awareness about its impact which is good but let me tell you that It takes a whole year to make and sell drug related things but we so-called intellectuals come forth on 26th of June only and that too for a few hours to deliver speeches/sermons against it! In our speeches that we deliver in schools, universities and so many great places we not only spread awareness but also try to scare the students by the lines like” illicit drugs such as Cocaine and Heroin often get mixed with cancer-causing cutting agents. Addiction to illicit drugs increases cancer risk; when carcinogenic substances such as tobacco and alcohol are mixed, risk of cancer only increases even further” How can these lines help the drug addicts to avoid drugs, the image shown on the packets of Cigarettes are scary too but did it ever kept away. Our youth from smoking? No! It is, I think, the most ignored image, and it only exists to decorate the packets of Cigarettes.
Drug addiction among youths nowadays has become a trend and fashionable. For them, taking drugs is making them look cool which is drastically wrong indeed. Recently, I watched a video on Facebook in which residents of a locality had seen some boys taking drugs, so they tried to handcuff them, but unfortunately, they were lucky enough and escaped but fortunately, their stuff was snatched by the people! There were different alcohol brands, Marijuana, Drug injections and what not. Good to see that the people destroyed all the noxious things that came into their hands. It didn’t happen in Jammu, neither in Delhi, the video was taken in our so-called Heaven on Earth Kashmir! Our pillars of the nation are getting eaten by infectious things still we are watching, we are not actually watching our youth taking drugs we are watching our future becoming dark. Drug addiction has prevailed in our society, and seminars and debates about it will never work. We need to rise against its use, it’s manufacturing without taking care of the taxes that are coming from the companies who manufacture drugs, cigarettes and all the other noxious elements.
We need to stand on our feet and start an eradication drive of drugs and drug manufacturing companies. After destroying every single drug related thing, then we can educate youth. Allow me to explain. Nowadays, we are conducting seminars and debates on the motion of drug addiction, but we are getting the opposite response from people, why? Because drug or Cigarettes or tobacco manufacturers are conducting more tempting advertisements in favour of it! So, we can’t stop youth from taking it.
According to a news report, the Minister for Social Justice & Empowerment Thawaarchand Gehlot launched the website for the Nasha Mukt Bharat Abhiyaan (NMBA) on the occasion of International Day Against Drug Abuse and Illicit Trafficking on 26 June 2021, which is observed worldwide to strengthen action and cooperation in achieving the goal of a sustainable world free of substance abuse, news report explains that the launch of Nasha Mukt Bharat Abhiyaan (NMBA) is for 272 Districts across 32 State/Union Territories that have been identified as the most vulnerable in terms of usage of drugs in the country. These vulnerable districts were identified on the basis of findings from the Comprehensive National Survey and the inputs provided by the Narcotics Control Bureau (NCB). According to the National Comprehensive Survey conducted by the Ministry of Social Justice and Empowerment, there are more than 60 million drug users in the country, of which numerous users are in the age group of 10-17 years. Kids! Kids are more vulnerable. We should say the kids of our country are drug addicts which is a matter of embarrassment for us and parents are responsible for this because of weak parental guidance. Govt shall be responsible too for not banning or for not taking the strict action against this but now NMBA seems a ray of hope which might eradicate the use of drugs because the objectives of NMBA are:
* Awareness generation programs
* focus on higher educational Institutions, university campuses and schools
* reaching out to the Community and identifying dependent population
* Focus on counselling and treatment facilities in hospitals and rehabilitation centers that have been geotagged
* Capacity building programs for service providers.
Nasha Mukt Bharat Abhiyaan is operational with the involvement of more than 500 voluntary organizations across the country, which are assisted financially under the National Action Plan for Drug Demand Reduction (NAPDDR) scheme of the Ministry of Social Justice & Empowerment.
NMBA must be supported by everyone because its mission is profound, and it’s for the betterment of everybody.
Let’s rise against the menace and cease ruining our future deliberately. Drug addiction will not take away our stress or tensions. It’s a misconception; it will only make us devastated, despondent, dependent, and filthy creatures. So, we must rise against it, and we must believe and have faith in NMBA.